6A into Mk1 or Mk2 Conversion Guide

Fitting a 2.0 16v motor to a Mk1 or Mk2 Golf is becoming increasinly popular because it's cheap, easy and gives very good torque and power figures. A number of engines are available for such a conversion, each having their pro's and con's for any particular application.

Popular choices have been the tall block ABF engine found in Mk3 Golf GTi 16v's as well as various Seats, or the 9A short block engine found in late model Passat GT's and late Corrado 16v's. For many people there are the ideal choices, but these motors can be difficult to find and are often overpriced.

An exellent alternative is the 6A engine found in the Audi 80 2.0 16v's of the early to mid '90s. This engine is basically the same as the 9A except for the fact that it is fitted logitudinally in the Audi (as opposed to the transverse fitment favoured by VW and Seat), meaning that a few more parts need to be swapped over onto the 6A in order to get it to fit into a VW than would be the case with a 9A.

This fact makes the fitment of a 6A slightly more complicated than the 9A or ABF, but has also meant than many more of these engines have survived in scrap yards and have not been snapped up for conversions by other people. There are plenty of these engines available in normal (i.e. non-specialist) scrappies and you should be able to pick one up for under £200. A further benefit of these engines is that the cars they were originally fitted to were not out and out sports cars and have consequently not suffered from years of thrash. All good news.

I will try to explain here the various changes that need to be made to a 6A engine in order to prepare it for use in a VW. I will not cover issues ralated to conversions into specific cars as once the engine is prepared it will fit exactly the same way that a Mk2 Golf GTi 16v engine (code KR) would. Further information should be readily available as to how to fit a KR into your car (if you don't already have one). For instance, I converted my Mk1 to a 6A just using the instructions required for a normal 1.8 16v conversion - as I had prepared the 6A to look like a KR prior to beginning the conversion. 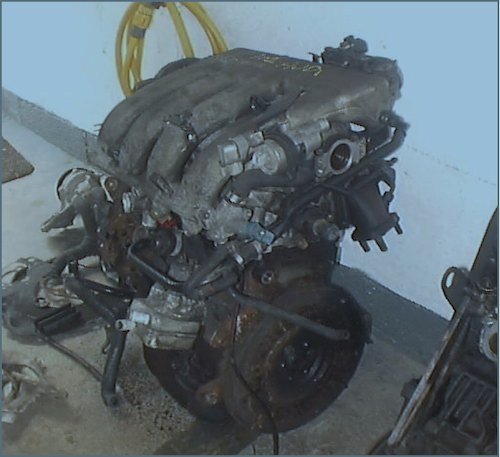 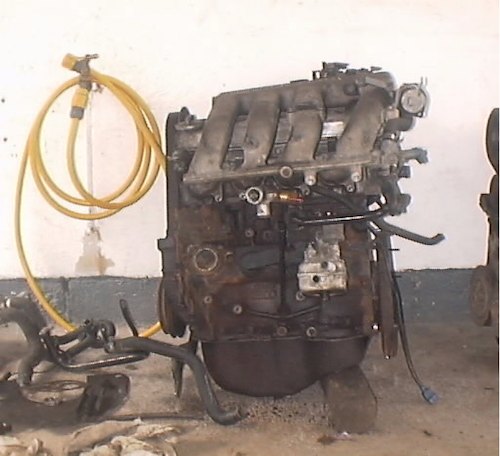 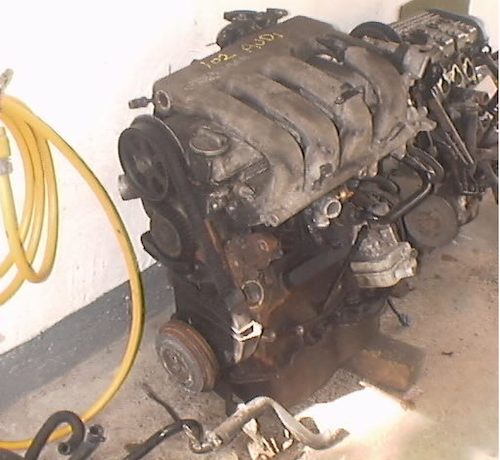 The pictures above show a typical 6A. This is pretty much the state that mine arrived in although I have already taken the water pump off in these pictures. Things to notice are the position of the throttle body on the top of the inlet manifold, the shape
of the sump, the oil cooler and the crank case breather. I'll return to each of these issues as we go along.

Firstly, due to the location of the throttle body the inlet manifold is useless so lets bin it. Similarly, the flywheel is completely wrong for eventually mating to a Golf's gearbox (the prefered option) so lets bin that too. While we are at it lets get rid of all that nasty pipework and find a nice hole in the ground to put the exhaust manifold into. We won't be needing any of that either!

Now we can begin swapping bits across from a suitable donor engine - or from the box of bits we've managed to amas after years of pulling VW engines apart! The choice is yours as to how to get the required bits and bobs, but given that all the parts needed from this point onwards come from a standard KR engin and that these are reletively cheap if you don't already have one, buying a donor engine is a very good idea. 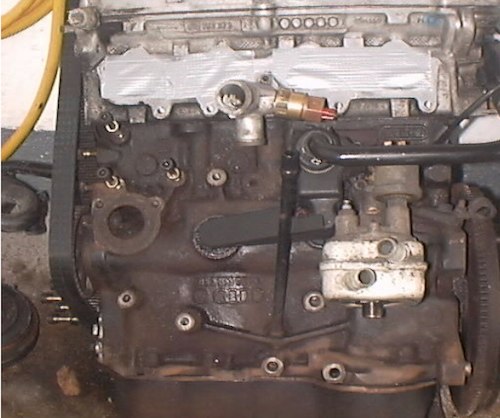 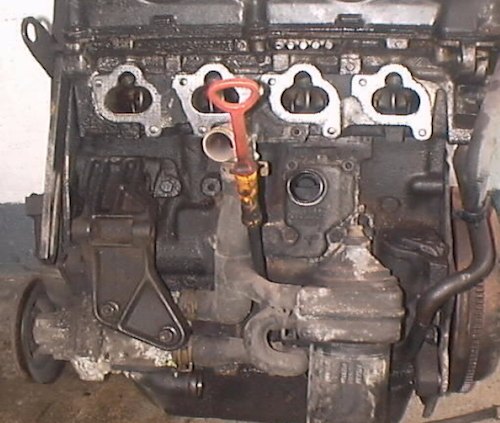 Compare the picture of our 6A (on the left) to a KR (on the right). There's not a lot of difference, and most importantly both engines have exactly the same bolt hole for all the ancilleries - with just two exceptions.

Look again at the pictures and you will see that the oil cooler/filter housing on the 6A is a slightly different shape to that of the KR. Consequently, the crank case breather is different as it is shaped to match. It is not possible to fit the KR oil cooler/filter
housing to the 6A block so we have to stick with what we've got. All that was required was to rotate the oil cooler itself through 90 degrees so the water pipe connectors faced the correct direction.

An important note here is that I have heard some people complain about the oil filter on their 6A engines being angled incorrectly for fitment into a Golf, but this was not the case with my engine. Apparently, if your engine does have an incorrectly angled housing there are a number of possible alternatives that can be sourced. Without first hand experience I am disinclined to suggest one here.

It is also worth mentioning that the top hose connection you can still see attached was a complete bitch to remove so I ended up leaving it where it was. The one on the 6A was perfectly acceptable once the electical sensor had been removed and the hole plugged.

The next issue is that of the sump. The KR sump is vastly different to that of the 6A and needs to be swapped over. When I did the conversion I left this job until the very end, as I could then freely drag the engine around my garage on the 6A sump that I intended to bin. It made life a lot easier, although you will need a block of wood to keep it from falling over!

When you do get round to swapping the sump there is one extra issue to attend to. The oil pickup pipe that is found directly inside the sump is too long to fit under the KR sump that you will be fitting so that needs swapping at the same time. On the 6A the allen key bolts holding the pickup pipe in place are easy to get at, but on the KR (if you are using a donor engine for the parts) you'll need to unclip the small plastic catch plate that is fitted to the end of the pickup pipe to get access.

One thing that makes the whole job worthwhile is to put the cams from a KR into the 6A. Those fitted to the 6A only allow it to produce 136bhp (which is less than the KR's 139bhp) although the torque is much better. Fitting the cams from a KR to the 6A can see the engine get 170bhp with upwards of 150ft/lb torque if properly set up. These are a straight swap, but remember that the cam bearing caps are matched to the head and not to the cams. The cams won't turn if you get this wrong!

There is a choice if inlet manifolf too. The 42mm variety found on earlier KR engines is said to be better for torque and the 50mm variety from later models better for bhp. I've heard mixed reports and have yet to see a straight comparison.

Now fit everything from a KR!

That really is all there is to it. Once you are at this stage you can proceed in fitting all ancilleries, electrics (inc all sensors), hoses, flywheel, clutch, manifolds etc. from a standard KR over to the 6A. What you'll end up with is a 2.0 16v engine that will fit exactly like a 1.8 16v.

That's it! Now fit the engine, get it tuned and have fun with your new toy!