It is now  forty years since the original Golf GTIs appeared on the roads and with seven versions of the Golf now around, it is worth looking at how the mk1 GTI has fared in the intervining years and compare it to more modern versions of the car that still holds the name.

Today a car with 112 Bhp and a top speed of only 114 mph would be considered rather average, even under par, for a performance car. Many modern hot hatches boast of upwards of 170 Bhp and top speeds over 130 mph. Likewise even the base model cars have 15" alloy wheels, bigger than the 14" Pirelli wheels of the 'Campaign'. Certainly many dull 'rep-mobile' saloons and mid-range family hatchbacks have greater power outputs and bigger engines!

Of course, modern cars are vastly better constructed than older ones, with better environmental considerations, and boast many safety features yet to be invented in 1983. Anti lock brakes, traction control, air bags, seat belt pretensioners, side impact protection and advanced crumple zone design. All of these are desirable on a modern car, due to the dense traffic situation and generally higher speeds that we travel at today. The argument that a good driver shouldn't need these devices is a valid one, but with so many patently 'below average' drivers on our roads it is comforting to know that both they and you have better protection than in the past if the worst does happen.

The major issue with all this safety technology is simple. Weight. Take a look at the table which relates both the weight of the various incarnations of the Golf GTI and then combines this with their power output, giving you a representative view of their power to weight ratios. 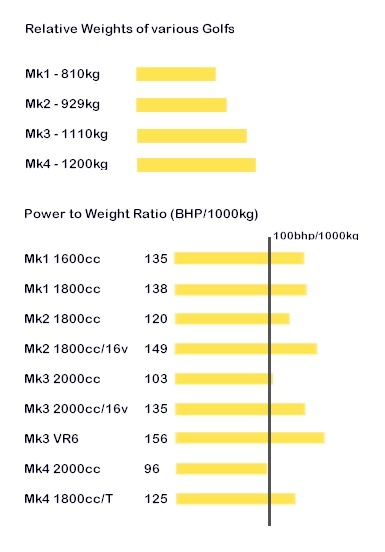 As you can see, the Golf has increased in weight significantly over the last few years, particularly in the jump from mk2 to mk3. The mk3 was the first Golf to have significant modern safety features built into it (some mk2s did feature ABS however). Unfortunately the base GTI, despite a jump to a 2 litre capacity, suffered from having a catalytic convertor and managed only 115bhp, scarcely higher than the original mk1. With somewhat softer handling than expected and the increased weight, the result was a 'GTI' which many felt didn't do justice to the badge.

VW's answer in both the mk2 and mk3 was a 16v engine, which certainly increased the power, but often at the expense of mid range torque, the engine response below 4000 rpm often being rather 'flat'. With the mk3s increased weight, even the 2.0 16v GTI was unable to match the acceleration and in gear times of the 1.8 Mk1.

It is interesting to note that even todays 150 Bhp Turbo GTI has an inferior power to weight ratio when compared to the original 1.6 GTI of 1977. Another interesting point is that the 2.0 Mk4 Golf GTI (normally aspirated) slips below the 100bhp/tonne line and has a 0-60 time of over 10 seconds. Only in the UK does this version of the Golf wear a 'GTI' badge, everywhere else it is simply a 2.0, perhaps comment enough.

With the advent of the Mk3 VR6 the GTI was no longer the top of the performance tree, with the superb VR6 engine taking the honours. In the mk4 varients, the V6 4motion and latest R32 models are the top of the tree now, but with four wheel drive and v6 power plants, they are a long way removed from the original 'GTI' concept.

With the increased weight comes other issues. To control that weight, you need firmer suspension, larger wheels, bigger tyres, power steering. The original GTI had 175R13/70 tyres, a tyre not even used on budget 1.1 litre runabout cars today. The mk4 GTI requires atleast 205/R16/50 tyres which wouldn't even fit in the wheel arch of a standard mk1! There is certainly more grip available, and it is possible to achieve higher cornering speeds, but again there is a compromise. In this case it is balance.

The mk5, reversed the trend. Back to front wheel drive, with many styling cues taken directly from the mk1 (look at the front grille, badge font and position, rear blacked out hatch area to name a few) it was the car to stir the emotions once again. It wasn't really comparable, being a different car for a different time, but it was good to see that the 'GTI' was coming back to strength and as with the MK6 and Mk7 continues for another generation to enjoy. It is interesting to note though, that the Mk5 enjoyed 200bhp from its 2 litre turbo charged engined, yet it is not actually that much quicker, point to point, than the original mk1 with barely half that power.

The original GTI was neither the fastest, quickest, best handling or best braking car in the world. What it did achieve was an irreplaceable combination of all of these factors. A throttle response that was not diluted by traction control systems, brakes that required the driver to pay attention rather than relying on ABS systems to get out of trouble. Suspension that had the feel of the road and could cope with quick changes of direction without damping that was too firm. Acceleration that was, and still is, impressive without the need for a huge engine or forced induction systems and the accompanying deliterious fuel costs. Handling and grip such that you could play with understeer and oversteer at legal speeds, rather than the sanitised cars of today which exhibit little character unless taken to a high speed trackday, with their oversized tyres and wheels.

The mk1 Golf GTI reached it's final and greatest form in the 'Campaign'. The secret is in the combination of elements. This mix of abilities can never be achieved again and it is impossible to build anything like a mk1 Golf GTI again in todays safety conscious climate. In many ways this is a good thing, as motorist safety should be a primary concern. But take away the fact it was the first GTI, take away the fact it is a classic car, take away the fact the brakes are marginal and it is noisy and harsh by modern standards. Now compare it to a modern car. What is the key differentiator? What is the key thing that separates it from all it's imitators and contempories?

Simple. It is so much fun to drive, and that is why it will always be the greatest Golf GTI of them all.

Copyright © by The Mk1 Golf Owners Club
All Right Reserved.