* * * Update 2007 * * *
Over recent years there has still been discussion on what makes a genuine 'Campaign'. The real answer has only recently been widely known, due to the generally wider availability of information from VW. A UK Campaign is defined by option codes S707 (Campaign package of equipment) and S750 (Pirelli alloy wheels). On well preserved cars, the option sticker will still be in place in the boot. However, many cars will have lost this option code sticker and there is no (known) way to research VW's original records.
Here is conclusive proof, taken from the VW-developed ETKA parts and information system, of the S707 option code and the 'Campaign'.

The original article is retained below. 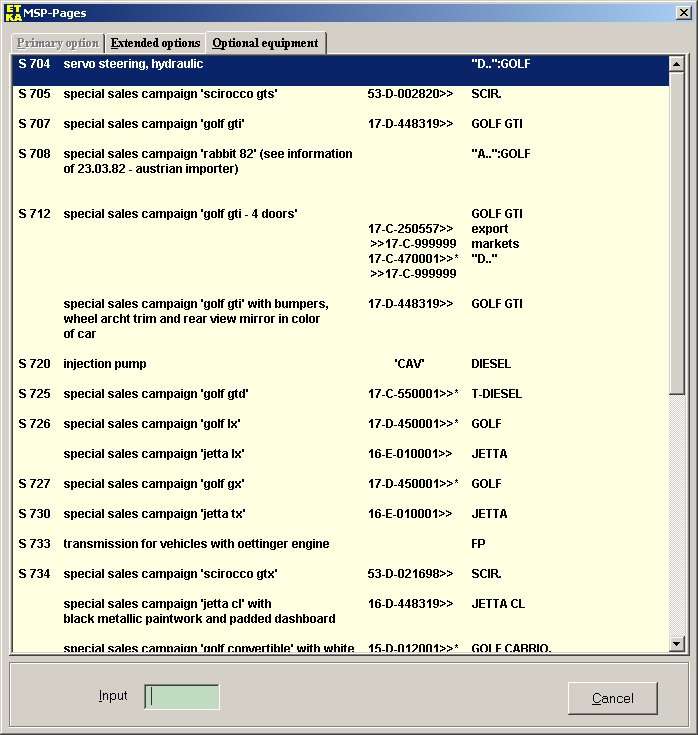 Despite the evidence from the letter, which clearly indicates one thousand 'campaigns' were made in August and September of 1983, there appear to have been more than this number in the UK, although many no longer survive. How could this be?

Back in 1983, the currency exchange rate between the UK and Germany was heavily tilted in favour of Germany imports. This meant that a UK spec car could be bought in Germany for less than the UK version, even considering import duties. Infact if you drove the car abroad for six months, this duty was not payable. My father did this with a B-reg Austin Metro and saved over 30% of the cost of the UK version of the car.

The Germans already had their campaign equivalent, 'The Pirelli Special Edition' and the French had 'The Plus'. These had gone on sale in May 1983 at the same time that the colour 'Helios Blue' was introduced. This car was almost identical to the later UK 'Campaign' Model. It featured the same additions, including the foglamps, the leather bound steering wheel and the alloys wheels. A number of these cars have been found in the UK, usually converted to right hand drive. Being prior to August 1983, these cars had DW chassis plates. 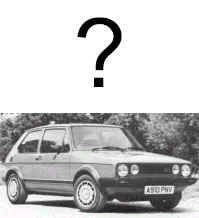 It was also possible to order a UK spec car from the German dealers, so a large number of 'cheaper' imports, from May 1983 onwards, which exactly matched the later 'Campaign' specification appeared in the UK before the official 'Campaign' was launched. These cars had 'DW' chassis codes, unlike the later 'official' 'EW' codes usually associated with the 'Campaign'.

Being absolutely strict, these cars are not 'Campaigns', but by any meaningful comparison they are identical.

So what to do? For the purposes of this register, we accept any of the May onwards DW cars that appear have all the campaign features. This is straightforward because VW does know the chassis number from which the German specification 'Pirelli/Special GTI' was available from. Therefore we accept all current UK 'Campaign' Spec Golf GTIs between the following chassis numbers.

This is a decision taken for the benefit for controlling the membership of the register and does not really settle the matter of 'What is a campaign'. My opinion is that each owner or prospective owner should satisfy themselves as to whether they own a genuine campaign Golf GTI. My own car has an EW chassis number and according to VW records, was built on the 22 August 1983. Which makes it unarguably a genuine campaign, according to the VAG letter!

Peoples Views on the matter, from comments on the website.

"Regarding the EW Chassis- I think that a geniune campaign should have these letters … I wouldn't buy a campaign without an EW chassis." - Christopher

"A campaign Golf does not need to have an EW chassis number, although the vast majority do… The difference between a DW and EW (can be) a matter of hours and cannot be used as the 'campaign ' benchmark." - Richard

"We have pleasure in announcing a special GTI model to be built in August and September this year (1983)… Details of this (Campaign) model are attached." - Douglas J Clare , in a letter to all VW dealerships in June 1983.

"There are a lot of questions that need to be answered. Was the campaign a UK only version of the GTI, distinct from the german 'Pirelli Edition'? The (pirelli) was definitely available on a DW chassis number… Were german cars imported with EW chassis numbers and sold as Campaigns? Were some late UK DW cars, that did have sunroofs, fitted with the campaign extras in order to sell them in the last few months of the mk1? Maybe we will never know!" - Drew

"(A Manager from a major car dealer) told me that the only reason a campaign model would have its own chassis code would be if it had special equipment needing alterations to the basic shell and specific to that model only, ie. lugs to hold an a/c compressor or similar.It is therefore resonable to conclude that when it was decided by VAG to produce a special 'run out' Golf GTI (in JUNE '83)shells with a sunroof were kept aside untill production started in August." - Richard