With mass production, cars are not built to whim, but literally for the masses, exceptions and tweaks are not allowed, and this especially holds true for a 'peoples car'.

But for every rule there is an exception, and he Golf was to prove that exception, the GTI was an first and foremost an 'engineers' car.
Today, a new hot hatch, or performance car is generally conceived in the mind of the marketing department in order to create interest in their car and lift sales of the more mundane models in the range. Back in 1973, the marketing people were not involved. The 'Sport Golf', as the engineers called it, was an 'evening and weekends' project, developed in secret outside normal working hours. Even when it was shown to the management, their interest was lukewarm, infact the sales and marketing people were against it, unable to see a market for such a car. 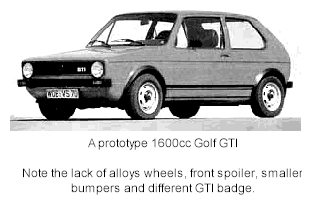 Thankfully, having been developed by engineers, it was devoid of stripes, spoilers and pretensions. It had no rear spoiler because it didnt need one, it had a front spoiler because it was found to reduce front end lift by 65lbs at 100 mph.
It had wheel arch trim to protect it from stone chips, not because it looked good. It had wider steel wheels to provide extra grip, a standard, though widened, exhaust system for the higher capacity engine.
Lowered and stiffened suspension was there because it provided the best handling and response. Fortunately for the engineers, at the same time the type 827 engine had been enlarged for use in the Audi 80 GT, which was introduced in 1974. With a 3mm longer stroke, the new engine had a 80mm bore and a 79.5mm stroke giving 1588cc and with the benefit of a Solex twin choke carburettor, it developed a hearty 100bhp. By now, the 'Sport Golf' was about 80% ready and had attracted more serious attention from the management, and it was decided to go ahead with a limited run of 5000. It was May 1975.
Shortly after this the car received its official name, 'The Golf GTI', and the type 827 engine received Bosch K-Jetronic fuel injection. Strangely it appeared that the 'I' in 'GTI', did not originally stand for 'Injection' as the german word for injection is 'Einspritzung', which leads you, heaven forbid, to a GTE! Perhaps it was suggested by Guiguaro himself, as in italian you would get 'Gran Turismo Iniezione'. Others have suggested that since Audi already had the Audi 80 GTE, Volkswagen simply used 'GTI' to be different.
Whilst the engine now developed 110bhp, this 10bhp was not really due to the injection system, but the addition of new inlet and exhaust manifolds and larger diameter valves. The final development dealt with brakes (rear disks were considered but, in hindsight, unfortunately rejected!), uprated anti roll bars, rims and tyres. These were finalised as 175/70R13s, hardly a performance size by modern standards, but very generous at the time. The gearbox initially had 4 gears. The Golf GTI prototype was just completed in time for the September 1975 Frankfurt Motor show, though it did not go on sale until June 1976. The engineers apparently set themselves the same standard of performance, durability and road behaviour that every normal VW had to pass. The car was launched in just two colours, Mars Red and Diamond Metallic Silver. Schwartz Black was added shortly afterwards.
Only six prototypes had been built before the project went official, but another 15 were produced towards the production date for durability testing. One car had to undergo a 62,000 mile high speed run. Others went for cold weather testing in Scandinavia and Africa for hot weather testing. Initially only a handful, reportedly four to five, engineers had been involved, but by launch time, over a hundred were working on the project. 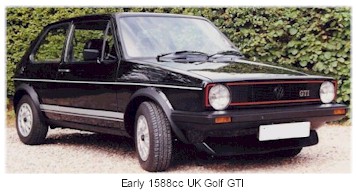 The car was not shown in the UK until late in 1976, the first appearance being at the London Motor Show. It was stated that no RHD versions would be available due to 'technical reasons'. It was reviewed by 'Motor' magazine which credited it with a 0-60 time of 9.6 seconds and a top speed of 108mph. It was available to import at £3,372. This car, MKT 512R, a Mars Red example, was probably the first Mk1 Golf GTI in the UK. Volkswagen dealers in the UK lobbied Volkswagen Germany hard for two years and at last, in early 1979, the Golf GTI was on sale in the UK with right hand drive. Shortly afterwards the 5 speed gearbox was also added to the 1.6 engine. Only 22 Golf GTI's were sold in the UK in 1978, but over 1500 were sold in 1979, and the Golf GTI has never wavered in terms of sales success in the UK since, except during the insurance problems of the early 1990s and even then, it was still one of few hot hatches backs to weather the 'insurance recession'.
In November 1979 'What Car?' lined the 1588cc 5-speed Golf GTI against what they perceived as its nearest competitors at the time; the Ford Escort RS2000, the Talbot Sunbeam Ti and the Vauxhaul Chevette HS. The Golf GTI won by a considerable margin, and history shows that, with the exception of the Ford, the other cars have disappeared into obscurity. Another colour, Alpine white, was added to the range, though this was not one of the most popular.
By 1980, the hot hatch concept had been established, and rival car makers were producing their own versions. Notable ones included the Vauxhall Astra Mk1, the Alfasud, and the new Ford XR3. But each time the various cars were lined up, there was always the same winner. 'Motor' magazine commented that "At the risk of sounding interminably repetitious, the GTI still rules!'. 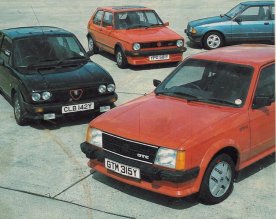 Which one would you prefer?