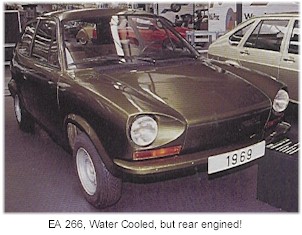 If you could look back to the early 1970s you would find Volkswagen a very different proposition than it is today. The Beetle, famous and much loved though it was, was ten years past its sell by date. The same executives who had created the success of the Beetle refused to commission designs that failed to match the Beetle formula of an air cooled rear engine design. Many prototypes were built, but none strayed from the party line, and none were successful. One example of this was EA 266. With air intakes ahead of the rear wheels everyone assumed that it was air cooled, but it actually featured an in-line water cooled engine. The engine was mounted on it's side, underneath the rear seats, making life interesting for backseat passengers! The engine developed a healthy 105bhp, but despite it's Porsche design studio origins, was not developed any further. 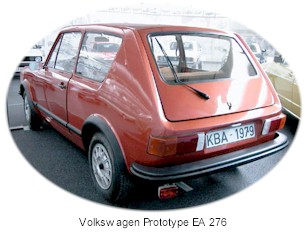 The Golf story starts with prototype EA 276, of which a single example remains at Volkswagens own museum. This car was jointly developed with Porsche and had a front mounted Beetle flat four engine and front wheel drive. This one begins to bear a resemblance to the 'Golf' we came to know. With a hatchback, Mars Red paint, wheel arch trim, and a sporty black side stripe, the early makings of the Golf had begun to show. As this prototype was developed the beetle engine was dropped in favour of a new water cooled engine from 'Auto-Union'. The man behind this prototype, Heinz Nordhoff, unfortunately died in 1968, and this prototype died with him. His successor, Kurt Lotz commissioned a programme to find 'The Next Beetle' and prototype EA337 was started. Giorgetto Giuguaro of Ital Design was brought in to design a small hatchback, with front wheel drive, a transverse water cooled engine and space saving suspension. 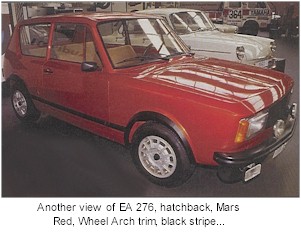 The engine for the new prototype came from the recented acquired 'Auto-Union' company, owners of the 'Audi' name. In turn, this engine had been developed with Mercedes Benz prior to the acquisition. Referred to as a type 827 engine, it was available in 1296cc and 1471cc. Unlike any previous Volkswagen engines it featured a thoroughly modern design, including a belt driven overhead camshaft, cast iron block and a light alloy cylinder head.
Guiguaro had penned two cars, one a hatchback saloon and the other a coupe, both on the 7'10.5" wheelbase. The hatchback design became the Golf, and the coupe, the Scirocco. The Scirocco was launched first, by about 6 months, reputedly to give the Volkswagen dealer network some experience with the new cars before the mainstream Golf was released. The Golf started with two engine options, a new 45 bhp 1093cc engine (originally destined only for the upcoming Audi 50, later the Mk1 Polo) and the newly available type 827 engine with 1471cc. This latter engine developed 70bhp in this form, with 0-60 in 12.5 seconds and a top speed of 98mph, even this was quick in 1974. Later a 55bhp 1272cc engine based on a bore and stroke of the 1093cc replaced the 1500cc. 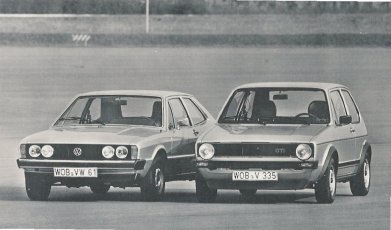 The Golf had arrived.