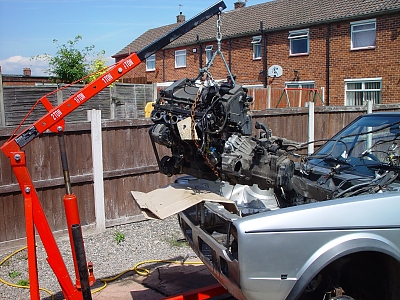 While there are things you can do to the 1800 GTI engine to make it more powerful, eventually you will reach a stage where its more cost-effective to swap the engine for another. Luckily, VW has a very 'modular' approach to parts design, which means that most of the required work is no more than bolting-unbolting items. Engines from approximately the same 'era' as the Mk1 Golf GTI are easier; once you get into more modern engines, there's other considerations too.

For all the below, we will assume you're starting from a big block injection engine (ie, GTI). If you're starting from a carburettor engine, there's more considerations. If its a small block, there's welding required, since the right engine mount is located in a different place. Also note, that the lower spec cars have softer suspension, no rear anti-roll bar, non-ventilated discs, a smaller master cylinder, narrower wheels and smaller tyres. So you are strongly advised to address these issues too. Often this will make a proper conversion uneconomic, it would be wise to consider starting from a GTI.

The GTI up to 1981 had a 1600cc (EG code) engine, 1982 and onwards used the DX (1800cc) engine. These blocks are very similar (see differences here) and with the age of the original engine, its not uncommon to find a 1981 or earlier car with an 1800 engine. The 'conversion' at a minimum, involves nothing more than swapping the 1600 top radiator hose at the same time as the engine. If you wanted to be authentic, you could also swap the other items, for example, gearbox, metering head, exhaust back box.

The obvious benefit here is the extra 200cc or so. There's 2 types of engine to consider, the 'bubble block' and 'tall block'. Typical power output is 120-140bhp, although more is possible with extra modifications such as porting & polishing, change of camshaft, raising rev limit, etc.

See here for further info into this type of conversion. 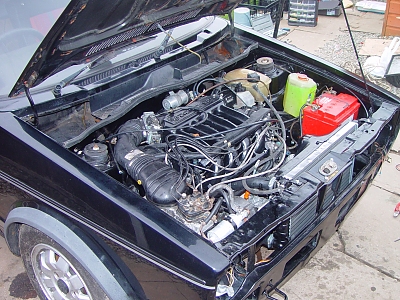 Typically using a KR engine code from a Mk2 Golf GTI 16V, although other cars also carried this engine. This is a popular conversion due to ready availability and cheap Mk2s for breaking. Its more involved than the 2 litre 8V because extra parts must be used, eg conversion exhaust manifold (off the shelf), wiring in the ignition ECU, relocating fuel lines to the other side of the car. But it gives 139bhp stock, and the 16V is responsive to additional tuning to achieve 150-160bhp. Also bear in mind at this stage you should be considering uprated suspension and brakes.

Again, there's 2 main variations based on the donor car: short block and tall block. The short block (which is the same height as the KR above) is popular because everything is block-compatible from the 1800 16V so you can use Mk2 GTI 16V parts to complete the conversion. However, the donor cars will have KE-Jet instead of K-Jet, so you need to mix & match fuel injection components for easy Mk1 application. Also, the 9A was a later design and came with a 'softer' inlet cam (designed to have less overlap, so as not to contaminate a catalyst); so another thing to do is to swap the inlet cam for a hotter one - most people use the KR cam, since this fits and gives approx 150bhp (stock 9A is 136bhp).

The other variation is the 'tall block' ABF engine from the Mk3 Golf (and others), this would have come with electronic fuel injection but K-Jet can be adapted onto it. The Mk3 Golf had a longer rod length (same stroke though), this gives a lower rod ratio which makes the engine smoother. But to accommodate this, the engine was made 16mm taller. This presents problems for fitting the exhaust manifold and the throttle body (which sits on top of the engine) contacting the bonnet. These issues can be overcome though.

Another step up in power, the stock engine is 160bhp, typically from a Corrado (but other cars also used the G60 engine). 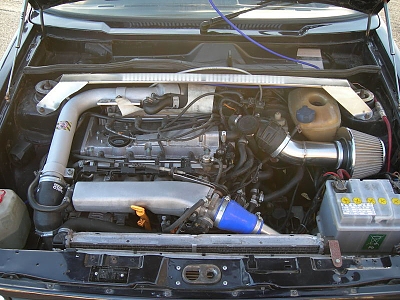 Ironically the 20V head is said to flow less well than the 16V, but this engine also has a turbo, which makes it capable of much more power than the earlier listed engines. Also, these are much more modern (Golf Mk4 era) so you are benefiting from an engine with less wear and a lot of life left in it; also its engine management is much more sophisticated (which has its advantages and disadvantages).
Everything to do this engine conversion is available bolt-on and off the shelf, although it tends to cost more than other engines. Stock power outputs range from 150bhp-225bhp and this engine can be further tuned (the major increases in bhp achieved by fitting a bigger turbo and optimising the engine management) to 300bhp, more if you are willing to sacrifice reliability.

This is included for completeness but isn't a 'mainstream' conversion which is often seen. Don't be fooled - this engine is sufficiently different to the others to make it a difficult conversion (fabricating engine mounts, manifolds, etc) but it has been done a few times, and it has its advantages. Also there are disadvantages, namely the engine is (due to its cylinder head design giving uneven inlet tract lengths for each cylinder) not that tunable for power; parts are expensive; and its heavier than the others, which is a consideration for suspension and handling. Obviously the main benefit is capacity, refinement and a different sound. Instead of 2 litres or so, you're looking at 2.8, 2.9 litres stock, so that's 50% advantage. The 2.8 is 174bhp, the 2.9 (Corrado) is 190bhp, the R32 is 240bhp, these are stock figures which of course would increase with tuning, but at high expense.

There are the occasional unusual conversions, for example inline Hayabusa 1300cc turbo; TVR V8 (sometimes argued as not a Golf, since it used the entire TVR floorpan and a cut & shut MK1 Golf body on top - this rendered it impossible to register for the road). There's a couple of people in USA doing V8 conversions based on Audi engines too, but so far its still a case of 'watch this space'. Also, there are conversions such as G40 (1.3 litre) which are occasionally done on small block cars - since this removes the need to relocate the engine mount.

Submitted by FIGO16
I've got a 1.8 carb engine in my mk1 what can I do a straight swap that will fit in with no messing about to much
Submitted by Leon Peace
Hi could you use the skoda vrs 180 bhp. Engine
Submitted by gonzalogamir
Hello I would also want to include the option of a  diesel swap with a cable 6 speed gearbox using Epytec mounts. In my case I am using an A3  1.9 ARL engine with 150 stock hp, easily remapped to 180-190….
Regards
Submitted by Rapid79
Hi all I'm new to this site , just a couple of questions

Ive just bought an abandoned project mk1 golf shell box of bits and a abf engine on carbs.
I'm wanting to run it on the NODIZ pro ignition system , and get rid of the distributor but unsure as to what coil pack I could use ?

2nd question is the engine mount that is bolted to this engine is right against the timing cover making it impossible to get the bolt through , what engine mount or mod do I need to do ?