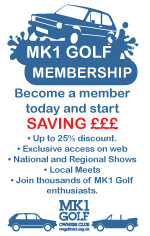 Engine 'management' Options: First things first....LABEL the mk1 loom as you remove it from the engine, sensors etc, if possible take pictures. I numbered each and checked I knew at least vaguely what each thing was called before I removed any wires. It makes life considerably easier if you get confused later on, do the same if you are braking a full car for the 16V engine.

This is the 'bare minimum' setup.

What you need (See Image 1 - Mk2 K-Jet 16V ECU and TCI Loom ):
The minimum parts required for K-Jet are shown in Image 1, its not much wiring and there's no need for any of the bits that go inside the car. The existing Mk1 'Main' Loom handles the rest of things (temperature senders etc). You only really need 16V loom to handle the coil, distributor, throttle switch and ISV. There are various Conversion looms available commercially (e.g. TSR diagram attached), no real benefit in using them over the standard loom.

This assumes you are installing the whole Mk2 16V setup, so no guide is required as you will be copying the 16V bay, wiring, hardware, pipe routing etc.

What you need (See Image 1 - Mk2 K-Jet 16V ECU and TCI Loom ): If doing this option, replacing the whole loom, it is likely you will be fitting the Mk2 KR ISV (part of the point of doing this conversion), so inevitably:
See "MK1 Golf 16V Main Wiring loom" for notes on using the MK2 Golf Loom
Note, Remove Mk1 TCI and its small loom section, these are not required as replaced with 16V items.

Connect to vacuum system. Mine feeds off the side off the one way valve
(Yellow/Black jobber in vacuum line).
B: Three Pin Multi Plug (Black/Yellow, Red/Yellow, Black/White)

Black/White. This should go from the ECU to join 'D' at the coil, or loop back and connect to Black wire from to TCI (see D below).
Black/Yellow. Throttle Position Switch, Pin 3 and onwards. This is not required, however can be wired up to give
Red/Yellow is the Fuel Pump Relay Trigger. NOT required if you already have an injection mk1 as you will have the existing Mk1 Fuel pump wiring and
5-Pin relay already in place. If converting a Carbed mk1 this wire could be used to trigger a 16V (4-Pin) fuel pump relay.
C: Single Ring Terminal (Black)

D and E are from the 16V TCI and replace the mk1 TCI connections to the ignition coil (the red/blk and black wires from the mk1 engine loom staying in existing positions on coil). Wire colours from TCI should match the existing mk1 wires: 'D' (Black) on 16V loom goes to Connection 1 (Black Wire), positive on coil. E (Green) on 16V loom goes to connection 15, (green wire), negative on coil.
F: Single Ring Terminal (Brown)

Temperature sensor - Side of head.
Image 2 - Image 2 - 9A Block with sensors

Note: I believe the image is of a American spec 9A engine, but the image helps for labelling of sender/sensor positions.
1 and 2:

Oil Low and High pressure switches. Wires already in the mk1 loom, except on the mk1 one of the sensors is located on RH side of head (if looking from front of engine bay back at the engine).
White Pressure Sender (High Pressure): Blue/Black Wire
Black Pressure Switch (Low Pressure): Yellow Wire
3, 4, 5 and 6:

There are four possible screw positions around this coolant outlet (obviously in this image 3, 4 and 5 are used and 6 is an empty one on top left hidden behind coolant pipe). On mine the arrangement/layout is as follows: