The 2012 season kicked off with Ultimate Dubs, Telford. For the first time the club had securred an indoor display, a real bonus due to the over subscribed requests for such positions. 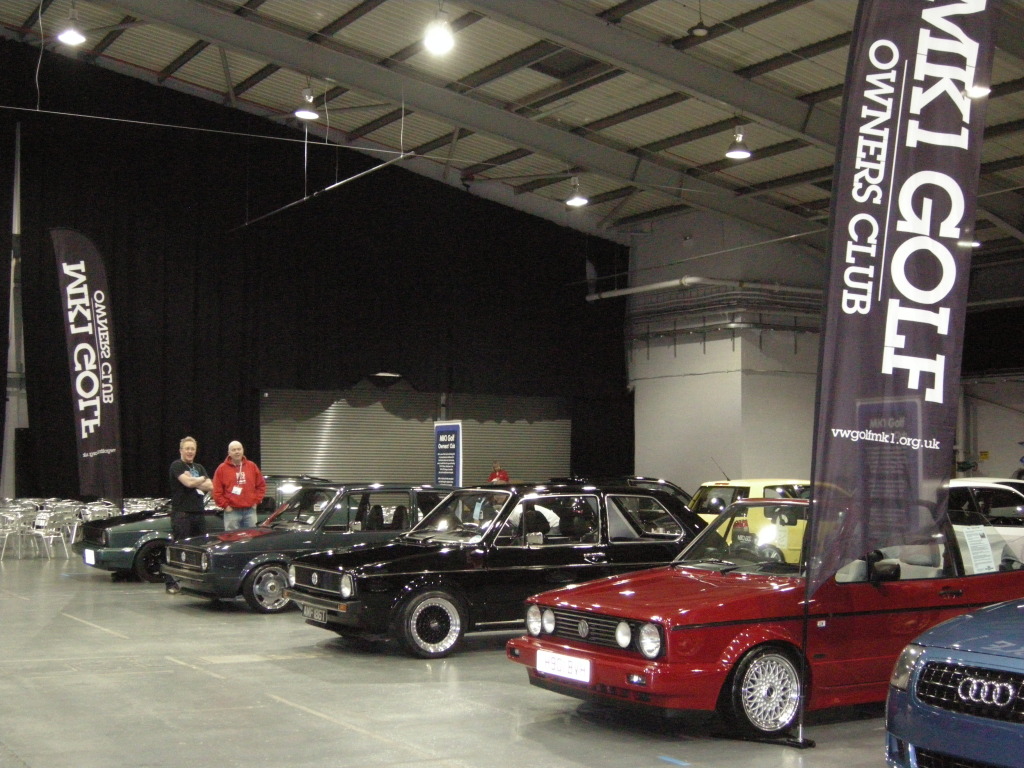 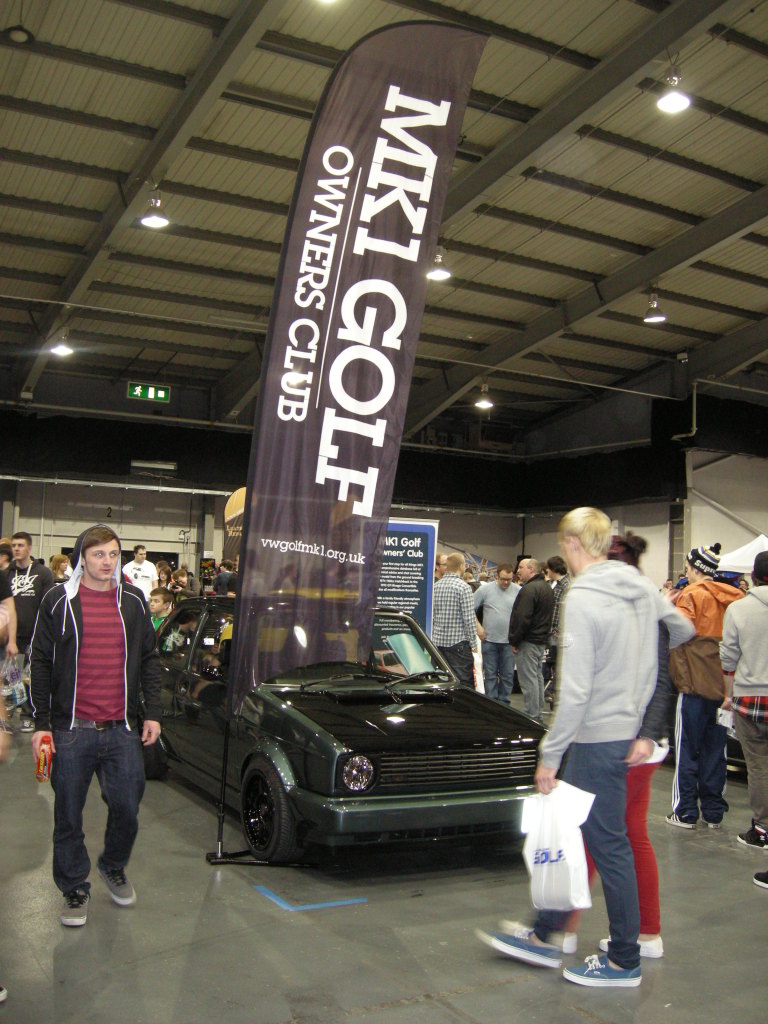 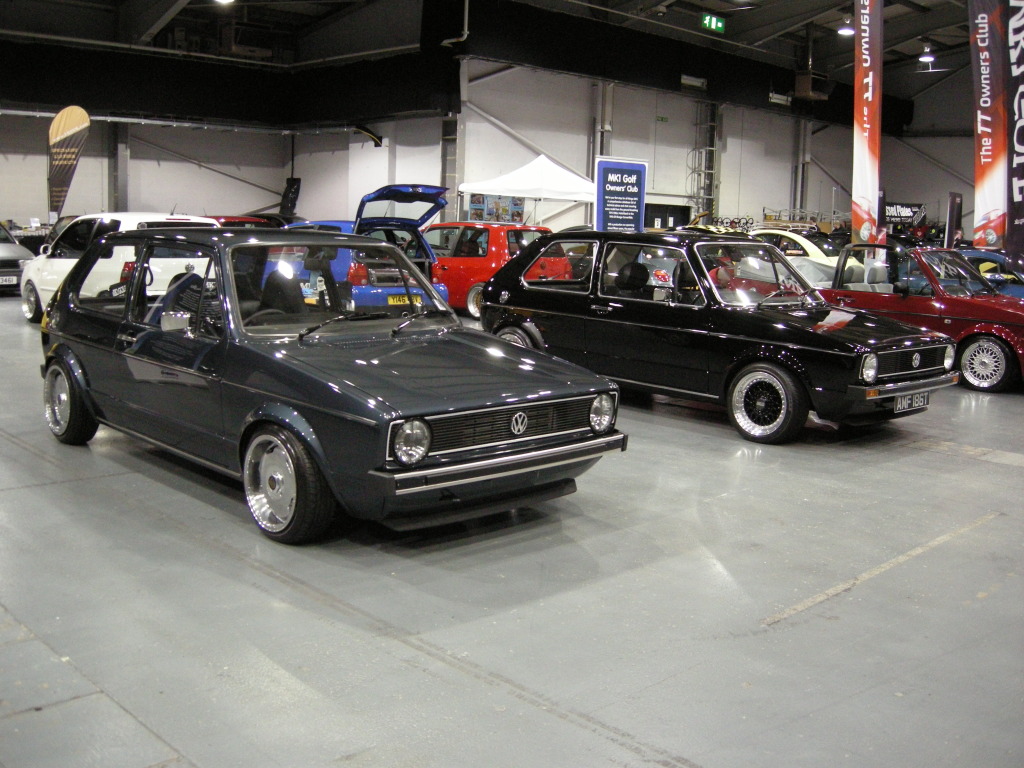 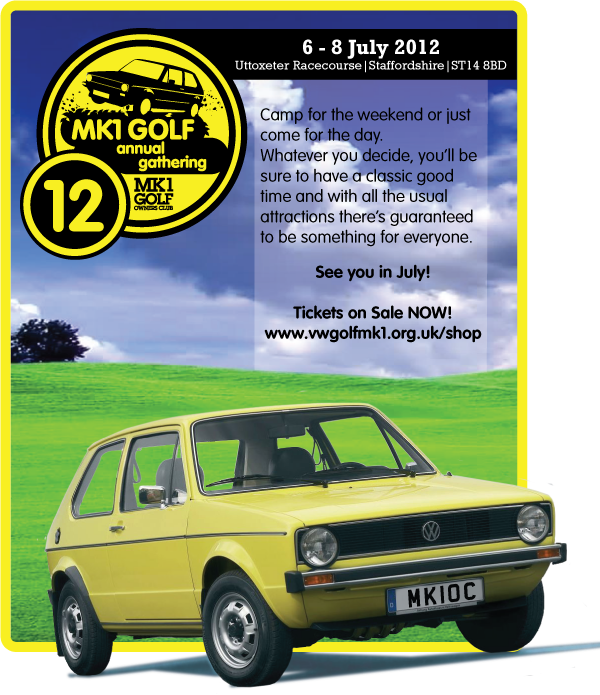 The 2012 AGM plans are already starting to take shape. The event will be held again at Uttoxeter Racecourse over the weekend of 6-8th July 2012. The dates have been changed to avoid a clash with Bug Jam following our members' requests.

The event is open to all VW fans, camping is available from 2pm Friday 6th July 2012 right through the weekend. If you'd like a relaxing weekend with good company and people who like to have a laugh, please visit our website at www.vwgolfmk1.org and have a look round the site. If you like what you see, why not come along in July 2012???

Despite all the planning, the numerous calls between the committee and the racecourse staff to ensure that everything was in place, the only thing that couldn't be planned was the weather.
As the committee were arriving at the course on the Friday morning the rain was torrential. Whether they travelled from the North, South, West or East it was bad. Local roads were flooded, the River Dove burst it's banks and the water flowed towards the racecourse.
Upon arrival at the course the management showed the committee the camping field, it was already ankle deep in standing water! The rain kept coming and the water kept sitting on the fields, it had nowhere to go.
An urgent meeting was held to determine if the weekend should be cancelled or the event should continue. Credit should go to Matt Whitehead, aka Jellybelly who spoke up and said 'Hell yeah. Let's carry on!!!' Once the decision had been made we waited for a marquee to be taken down and removed to make room for additional parking and camping.
The course management found us a dry(er) area to pitch tents and by 5pm on the Friday evening the rain had stopped and by 7pm tents were being erected in the sunshine! Beers flowed, spicy onions were eaten and everyone breathed a sigh of relief that the fun could begin.

Saturday morning saw the AGM meeting take place in the 'club house'. The outgoing Chairman, Andy Openshaw stood down and the position went to Dan Perkins for the second time. 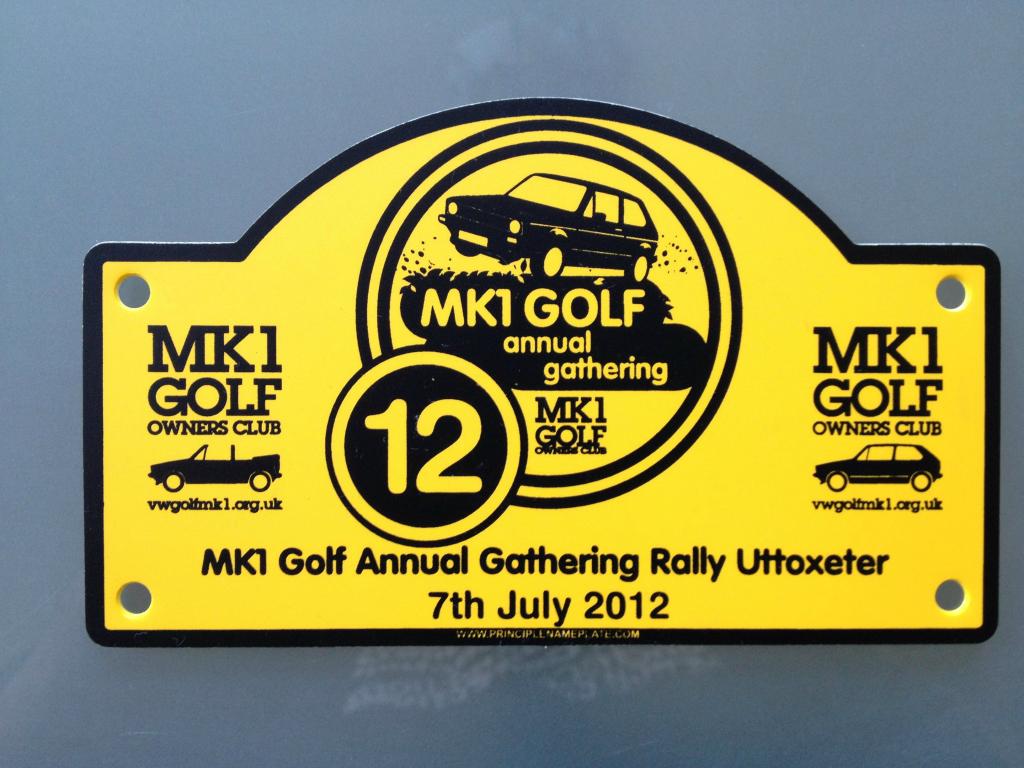 The afternoon was taken up by the road rally to Donnington Castle. 92 cars went out again this year!!

Saturday saw the fancy dress disco run through to 1am with 'afters' around the tents until the early hours.

Sunday's show and shine saw 92 entrants, which, considering the weather before the weekend, was marvellous. The cars were parked outside the Main Stand and more traders and auto jumblers were present than ever before.
3pm saw the judges finalise their first and second place decisions.

Awards were presented in the 'Winners Enclosure' and a surprise was presented to Andy Openshaw - a shaving foam pie from all of the committee!!! 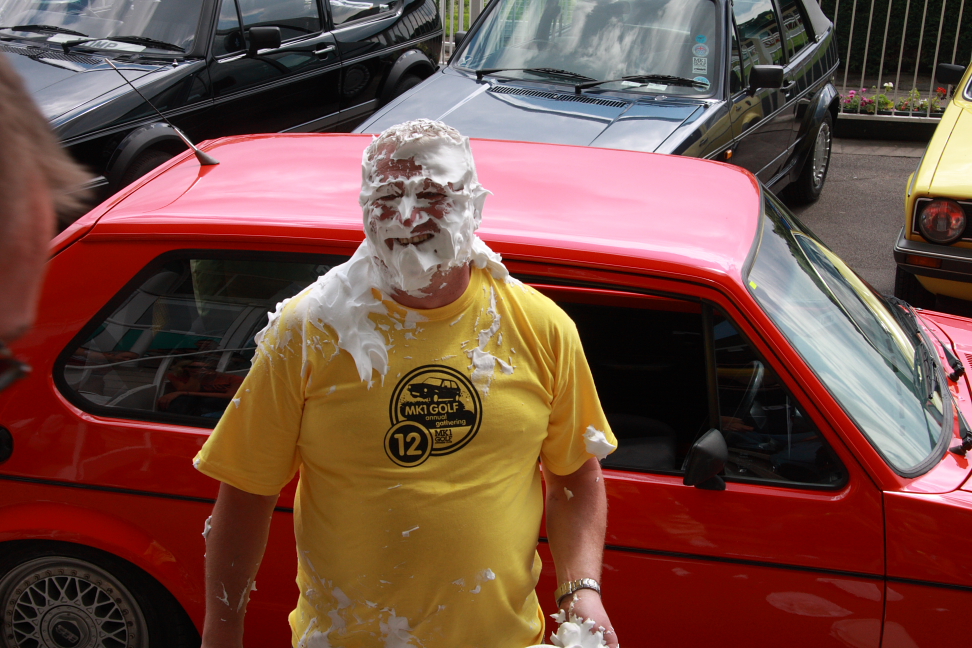 A trophie to commemorate his efforts was presented shortly after. 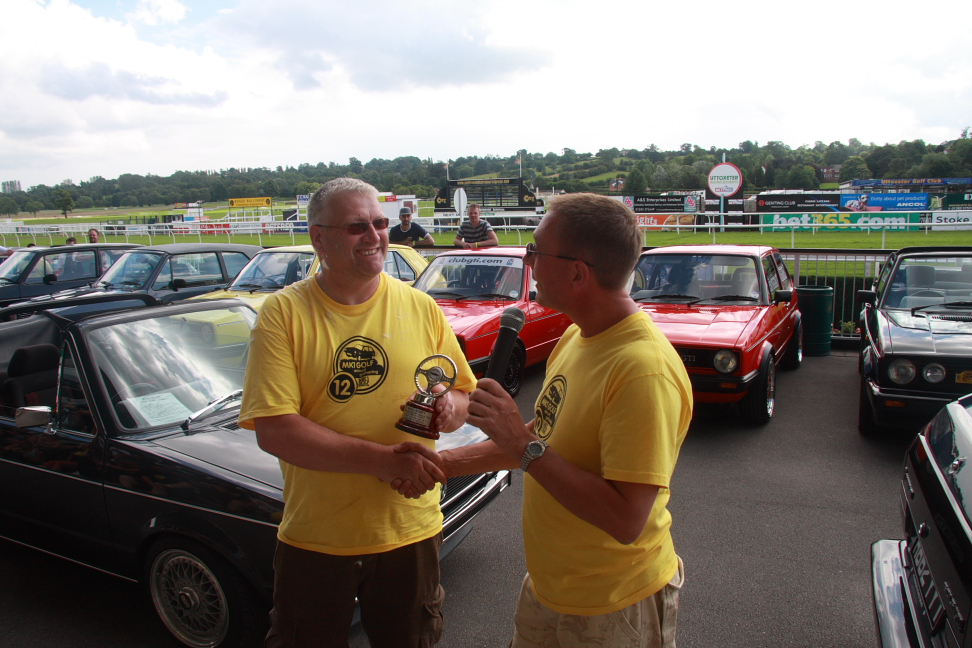 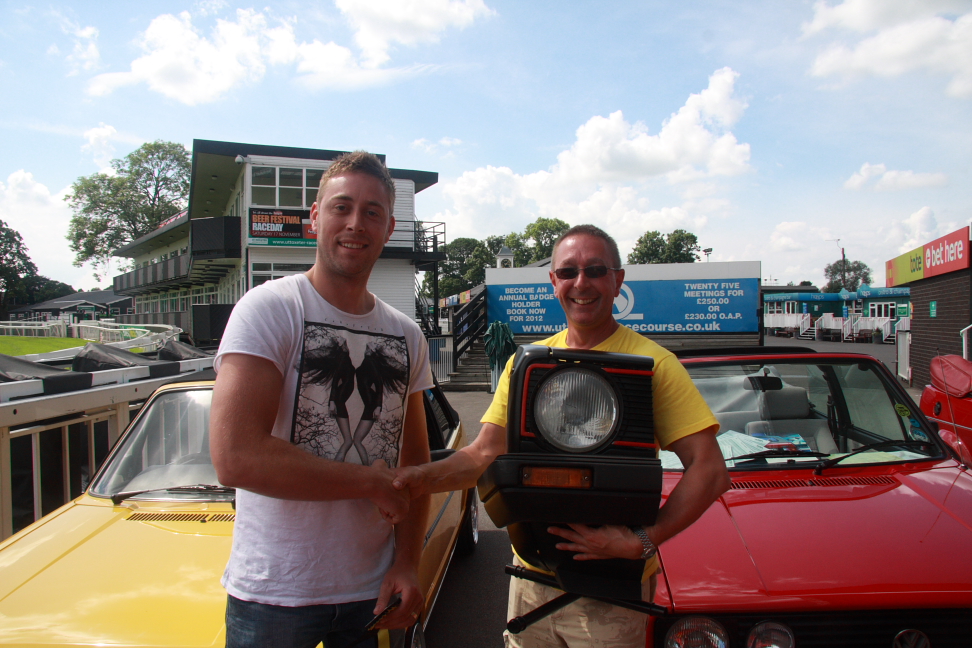 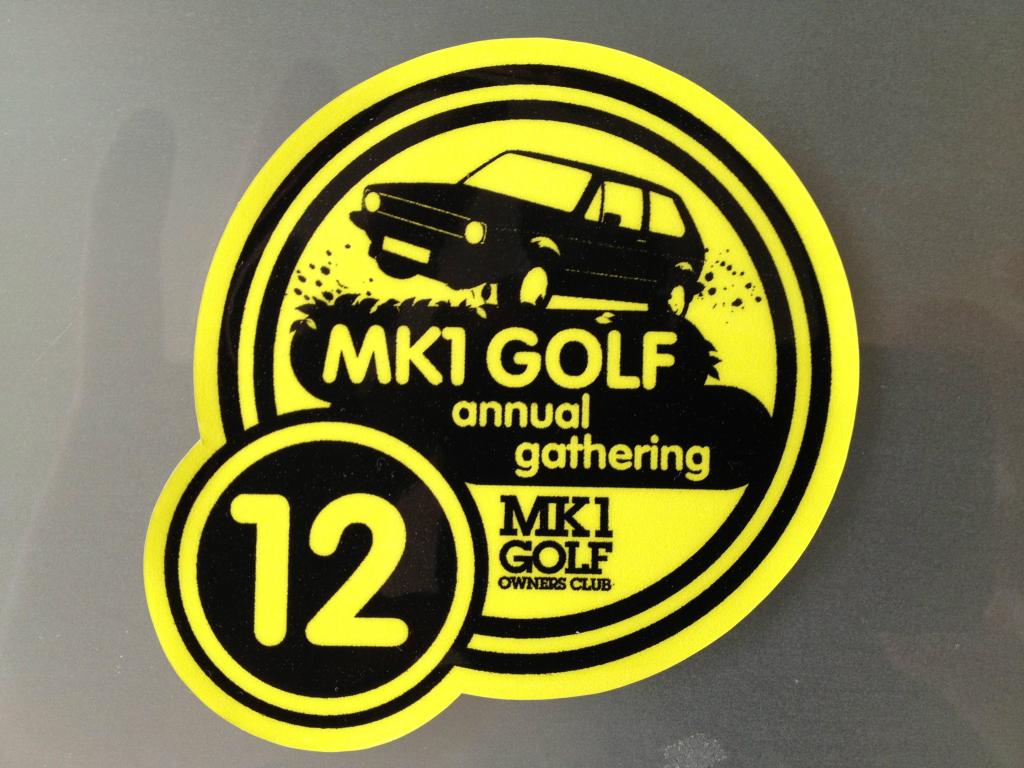 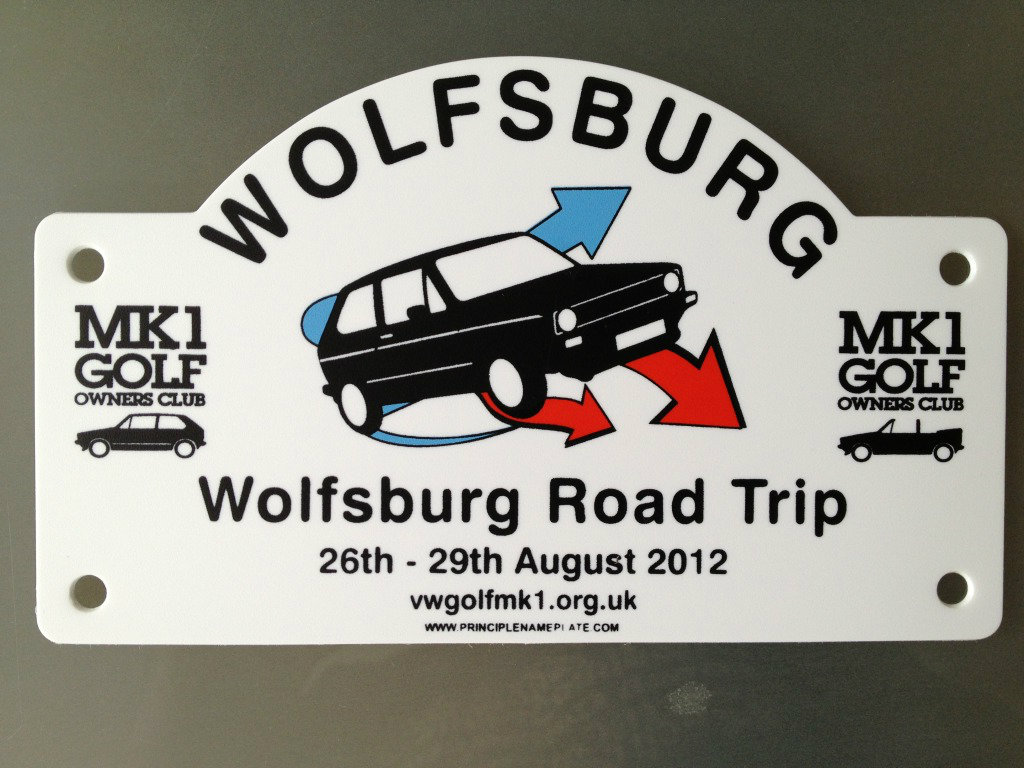 Over the clubs' 8 year history talk of a road trip to Wolfsburg has been mentioned on numerous occasions. The idea of taking Mk1 Golf's back to the plant appealed to so many people but no one took on the job. That was until September when Dave Giles aka Ginner on the forum really got to grips with the suggestion!!!
Dave began a few tentative enquiries with ferry and hotel companies, assisted by Haydn Lewis aka Taffygoat. Slowly bookings were made and 40 places were reserved on a ferry departing on Sunday 26th August 2012. In reality only 31 left Britain due to peoples' changing circumstances.
The intention was to catch the ferry from Dover to Calais and then motor through France, Belgium, Holland and Germany to West Garbsen, a district in Hannover.
9.30am the day before saw Everton Knight set off from his house. He was the most northerly English person on the trip. A group from Ireland had also set off and were joining the ferry to Britain around that time too!!! Lymm Truck Stop collected 2 more cars followed by Watford Gap for the Yorkshire and Midlands owners by then we were knocking on for about 15 Mk1 Golf's. The cars set off on the M1 and CB's kept everyone entertained with 'Brother Crow' being very popular!!! Hemel Hempstead and South Mimms saw more cars joining in and then it was over the Dartford Crossing in torrential rain. Anyone who's driven a Mk1Golf in pouring rain knows how slow they can be!! Eventually the hotel in Dover was sighted and everyone pulled in for food and a good nights sleep.
6.30am was the departure time for most but organiser Dave must have slept in because he only emerged at 6.45!!! Turning his engine over, oil was deposited all over the ground underneath. Luckily Lee Williams aka Bert, the Mk1 Golf Guru, was on hand to oversee the repair and get Dave moving again. A loose oil filter was the culprit.
Everyone made it to the ferry and we were off! 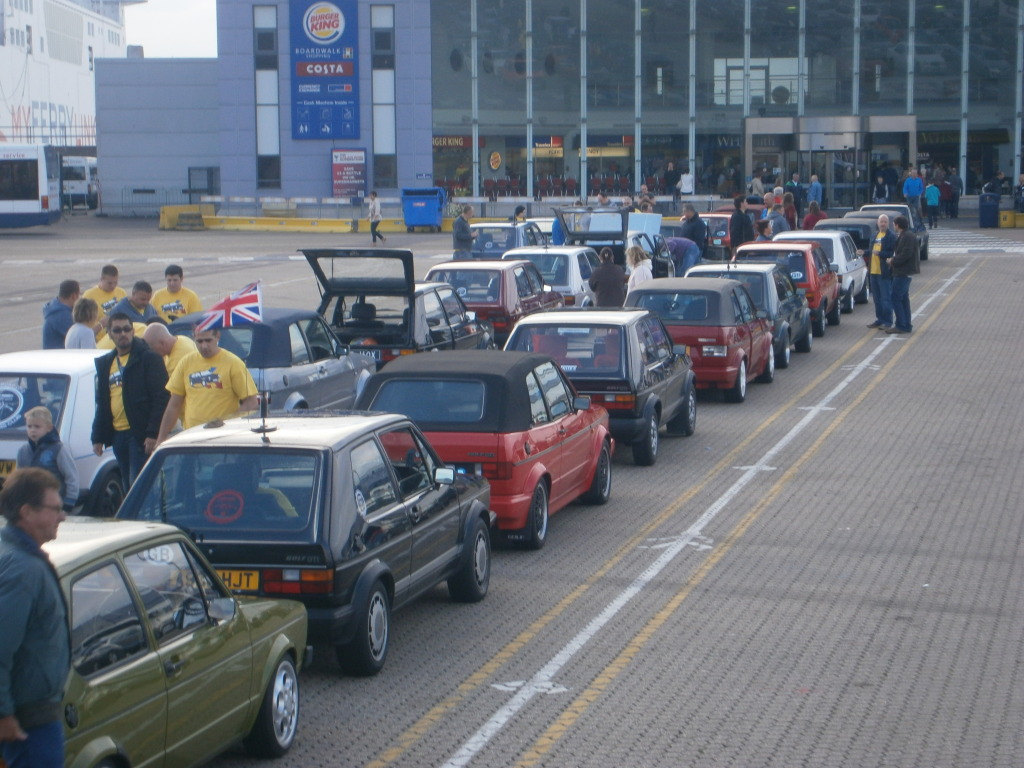 90 minutes later we were in France and the drive began. One thing that was noticeable was everyone had differing fuel levels. Over the next few hours it was a struggle to keep everyone together due to re-fuelling and traffic. If anyone ever attempts to take large numbers of cars abroad in a convoy split into 5/6 car groups, anything else is too much. Eventually things settled down and a steady pace was maintained.
Then disaster struck. Ade Daniels' aka Lhasadreams 1.9 16v Lysholm supercharged powered car had water pump issues. Ade pulled into the services to investigate. Sure enough the water pump had a problem. Ade got his jack out to attempt a repair in the car park and true Top Gear style some drivers kept going! A few drivers waited with Ade to lend moral support and keep the questions from the 'foreigners' to a minimum! Despite wrestling with the car for 90 minutes Ade eventually admitted defeat and a recovery was called. The car was fixed by Ade at a local VW garage and he resumed his journey the next day, joining the rest of the group at the hotel. 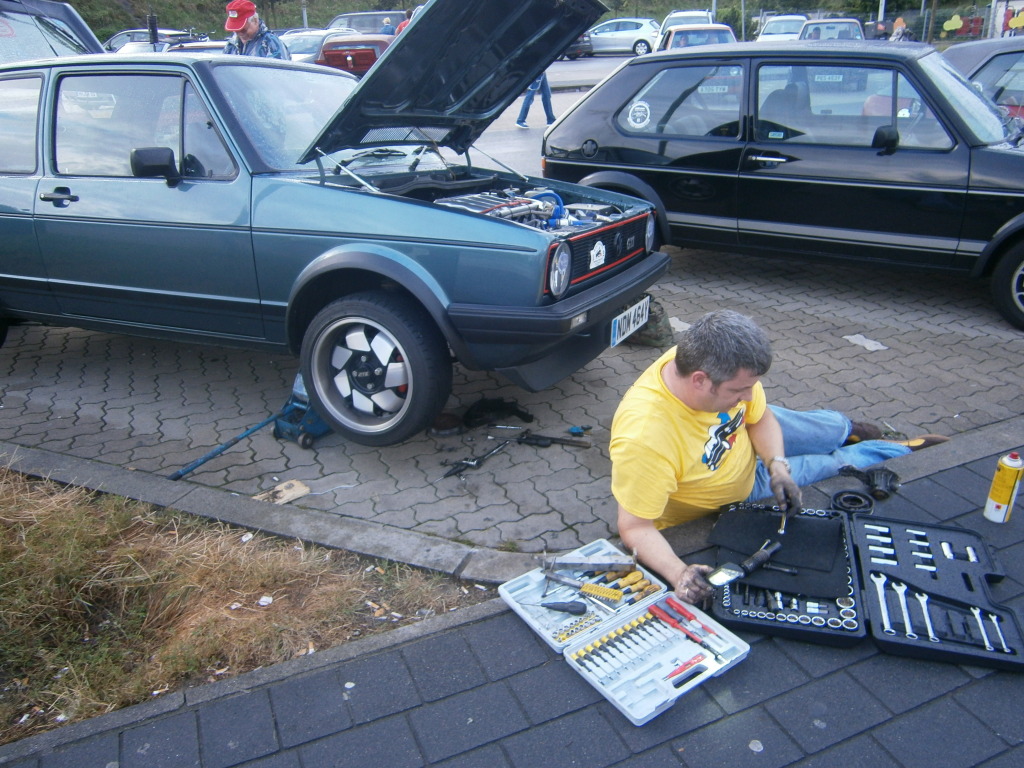 Soon the first cars started to arrive at the hotel and their relieved and tired owners started tucking into food and beer!!
Monday saw people head off in all directions, some drove to Wolfsburg for an extra day at the Autostat, some went into Hannover. Some spent 5 hours drinking cocktails and then tried to negotiate the Germany transport system! Luckily they found their way back in one piece! 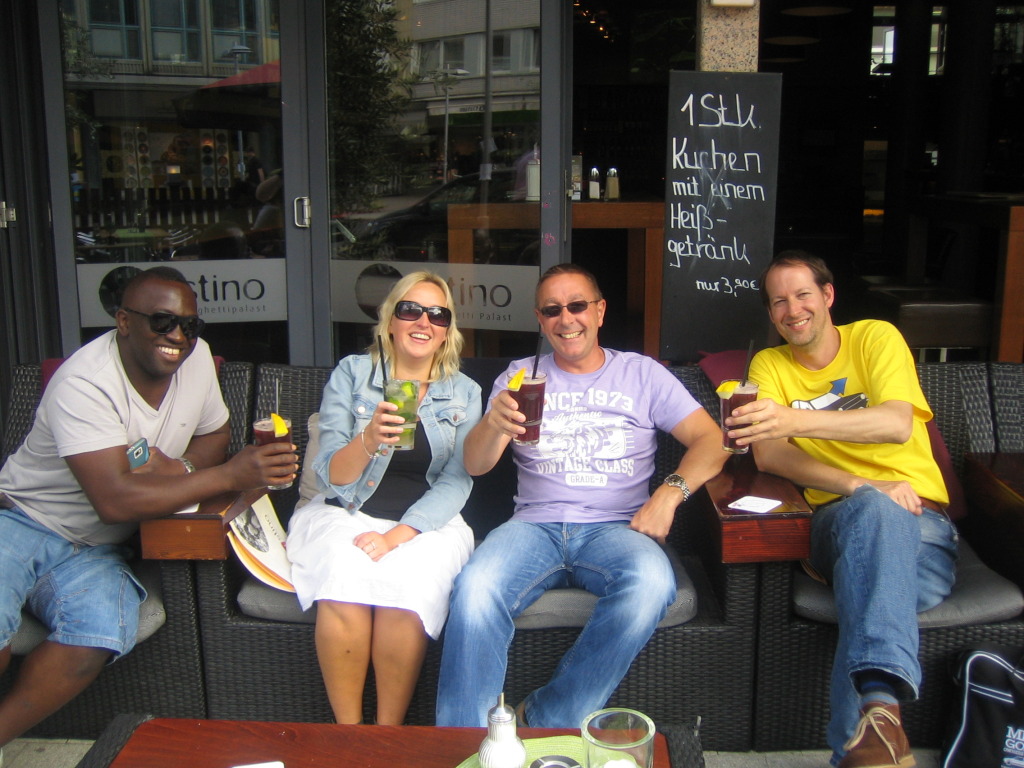 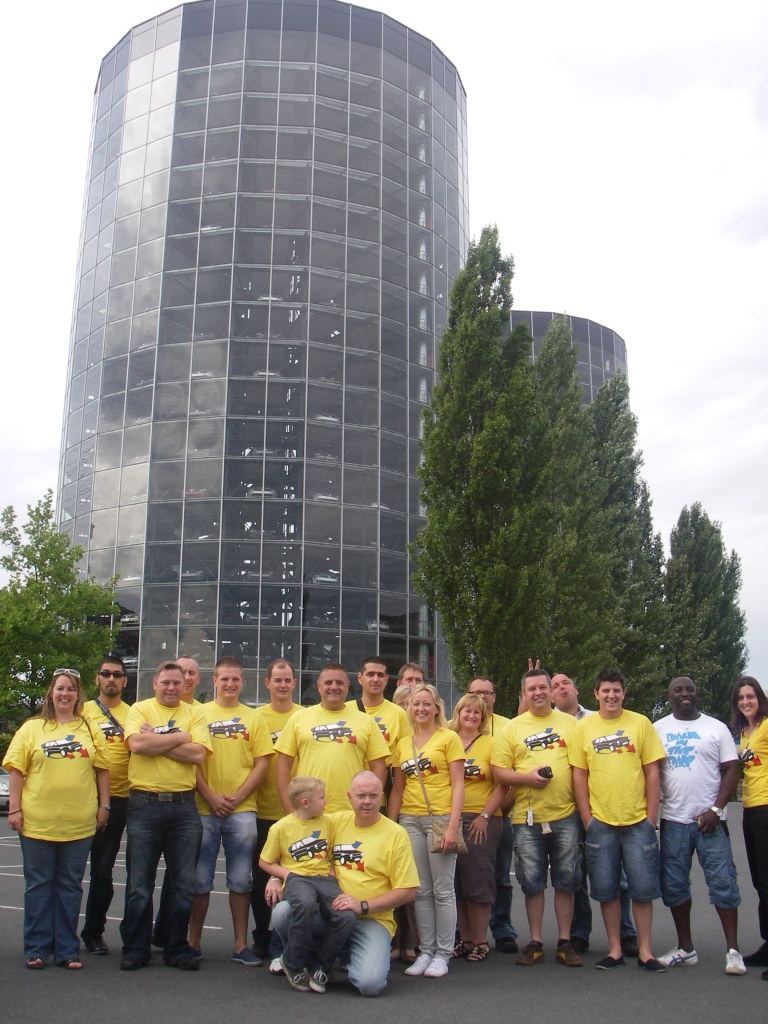 Everyone went to the site. All that can be said is 'Wow!' The place is massive and there is plenty to see. A small disappointment was confusion over the plant tour which meant that we didn't get to see that part but there was certainly a lot to see. A 4 level museum held lots of historic cars, not just VW but many other marques too. The two Towers were of great interest, each holding 400 cars. They are loaded and unloaded automatically to house the cars ready for collection by their new owners. Visitors can book to have a tour and explanation of the Towers. (Book when you arrive to ensure to get a place!!).
The VW Museum on Diesel Strasse was of great interest because it holds some of the most unique models ever seen. We'll say no more, you'll have to go and see for yourself!
Eventually the day had to come to an end because the club had been invited to meet council representatives of West Garbsen. Press reporters were on hand to interview owners and took photos for their publications.
It was said that you'd need 3 days to do justice to the complex and we'd agree with that. Book ahead, check your booking is correct and enjoy the experience! 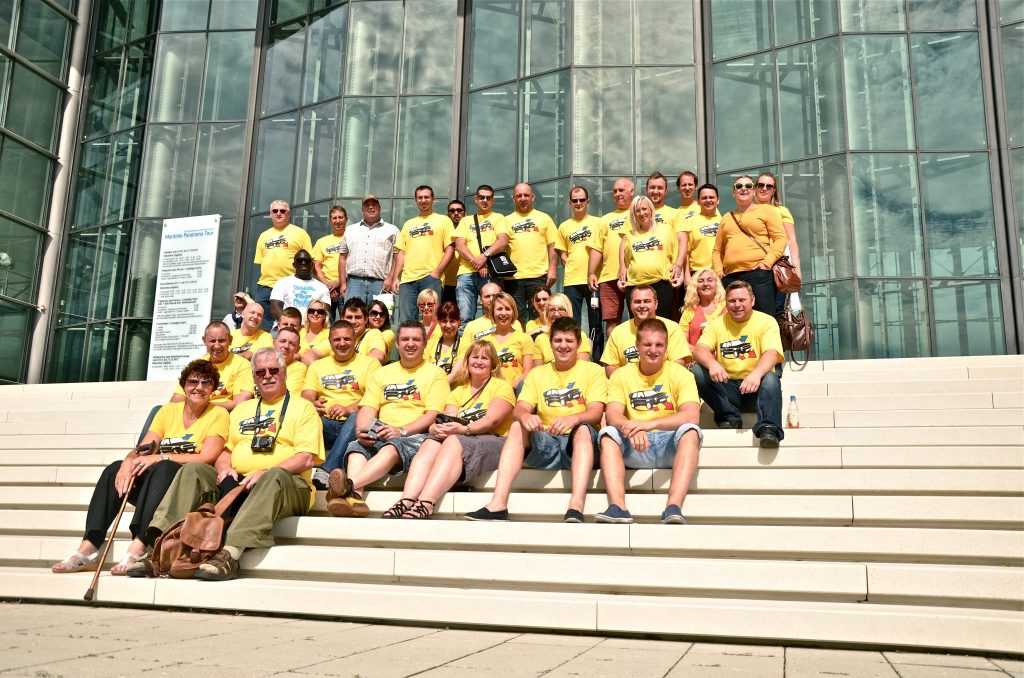 Wednesday morning saw an early start with the 'Irish lads' first out of the gates at 6.30 at the start of their return leg of 1839 miles!!! Drivers followed on and the Autobahn was free following….. It would have been rude not to test the cars wouldn't it??! All was going well until a serious accident involving 3 HGV's, pigs and heavy tail backs slowed us down. To say the crash scene was a sobering scene would be an understatement. Traffic was noticeably slower after it.
The crash forced some of our cars off the Autobahn and various groups took different routes to the port. Some made good decisions, others made bad ones. Some arrived early for their ferry, others ended up in Amsterdam!!! Ultimately, everyone got onto a ferry that night and reached the UK safely.
From there everyone headed for home or an overnight stay in a hotel.
If we were asked if we'd do it again, YES! Would be the answer - but with more time to take in Wolfsburg. Driving at high speeds over a long distance in a Mk1 Golf is very tiring!
There is already talk of a trip to Worthersee in 2014, the 40th anniversary of the Mk1 Golf!
See you there??? 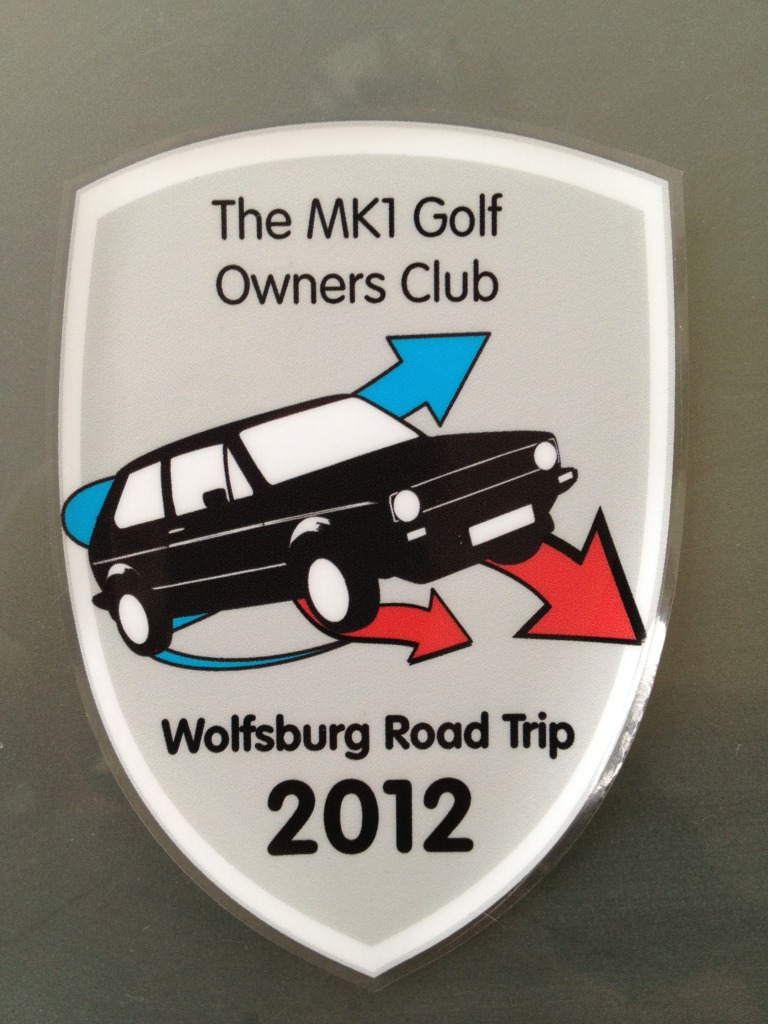 click here to be taken to the Wolfsburg Trip photographs

The club displayed 4 cars and a range of merchandise. Membership could be purchased and technical questions answered. Probably the most asked question ofthe weekend was 'How much is my car worth!!' 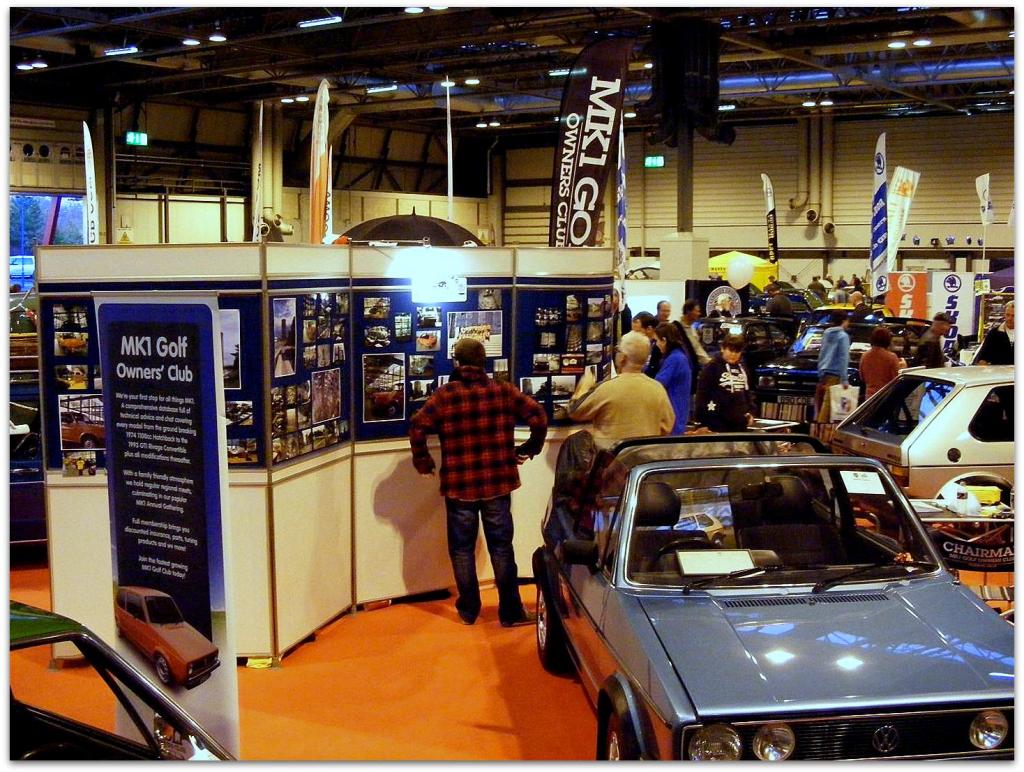 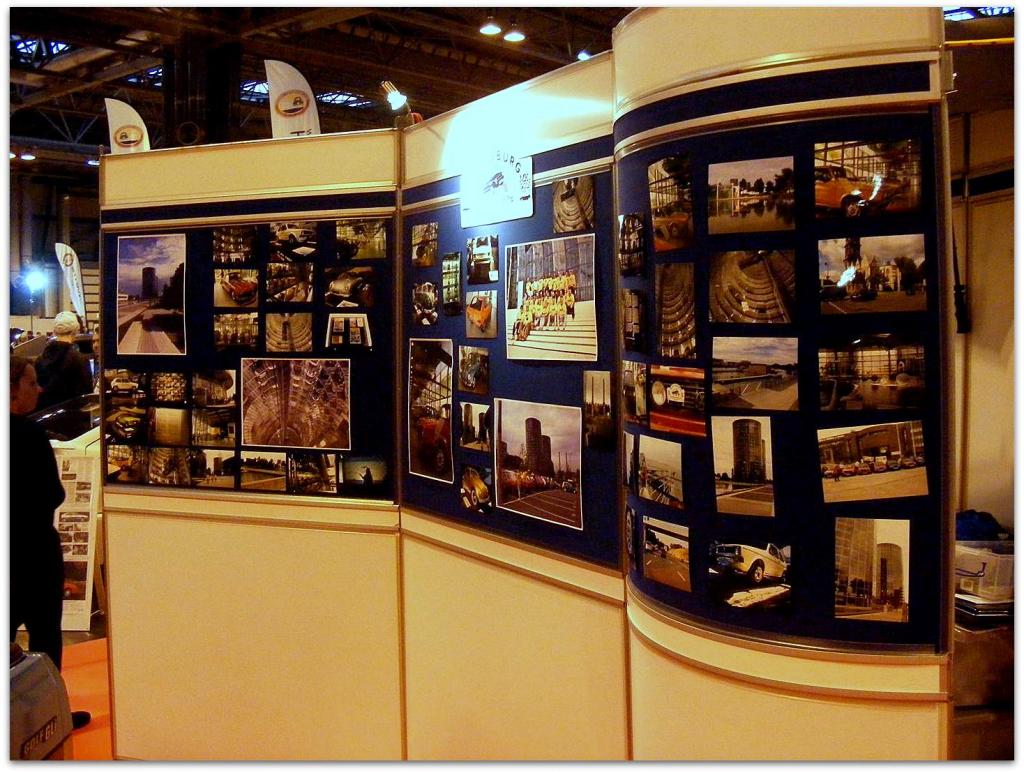 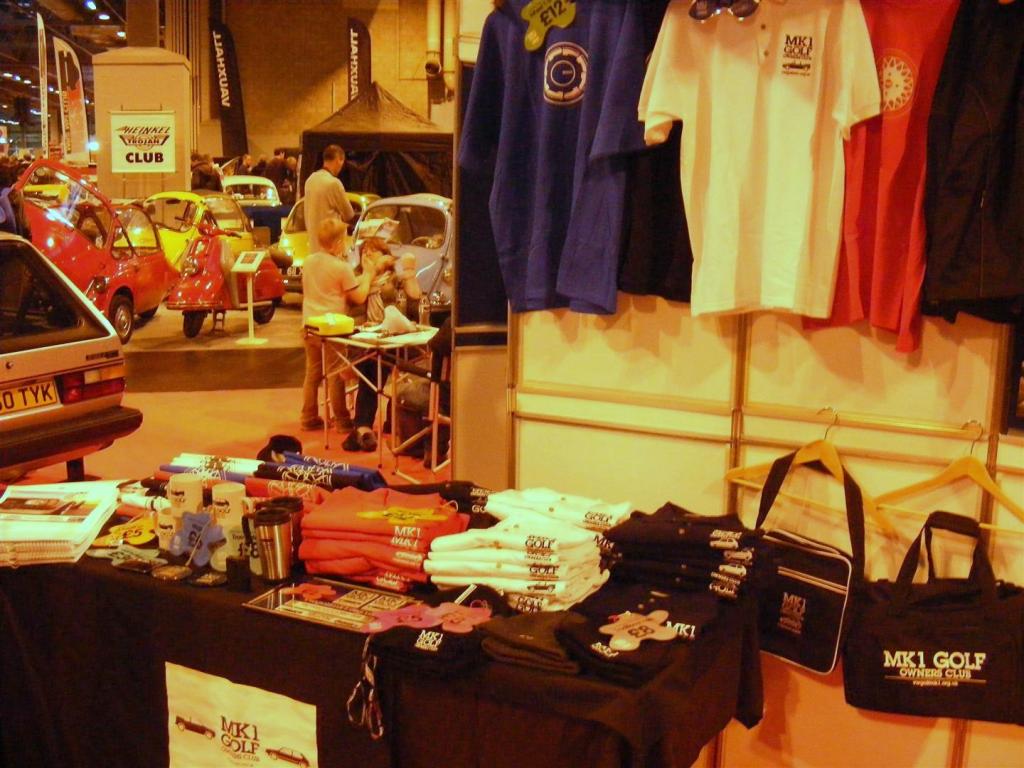 The club will returning to Uttoxeter Racecourse over the weekend of 26-28th July 2013 for the 9th Annual Gathering. Please check the website for further details in due course.