TG
Need your console repaired or mods done? drop me a pm

Not much of an update, I've been real busy with other stuff. Anyway, yesterday I managed to get on a little bit more. Inlet camshaft has been removed:

I've found a friendly local garage which are familiar with engine tuning, etc and they're going to swap the gear on the end of the cam, to the other one. All the ancillaries on the engine have been unbolted. The engine was very mucky and a pain to work on, so I refitted some of the ancillaries,  so I could close up the holes and degrease it. More pics to follow…

Finally, I've finished preparing some of the bolt-on items ready for painting. The 16V inlet manifold is so intricately shaped, its a right pain to do! 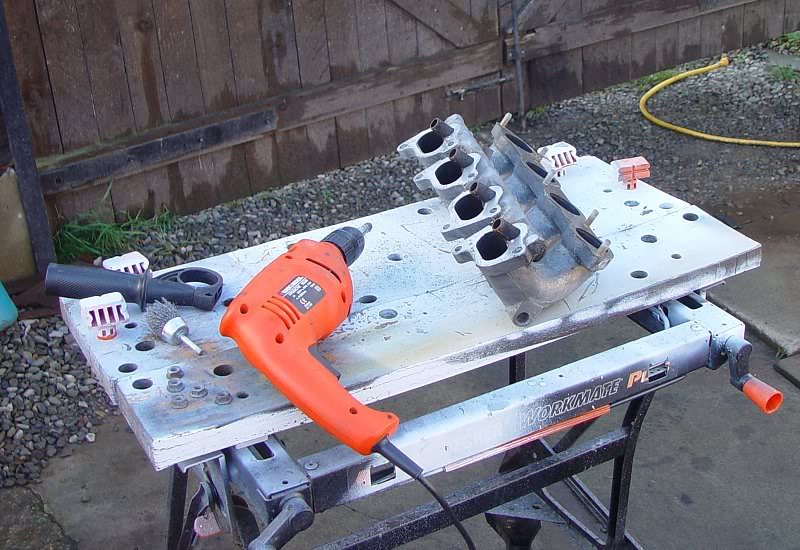 Here they are all prepped and ready for paint: 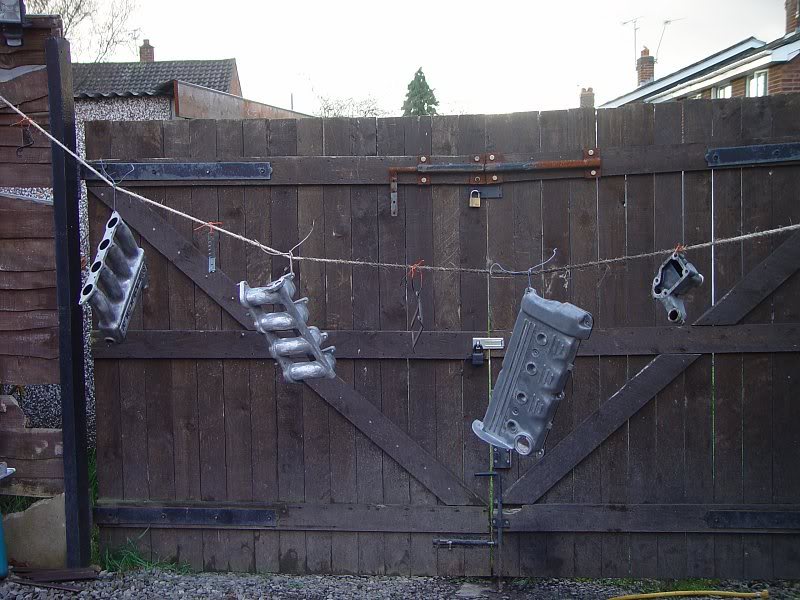 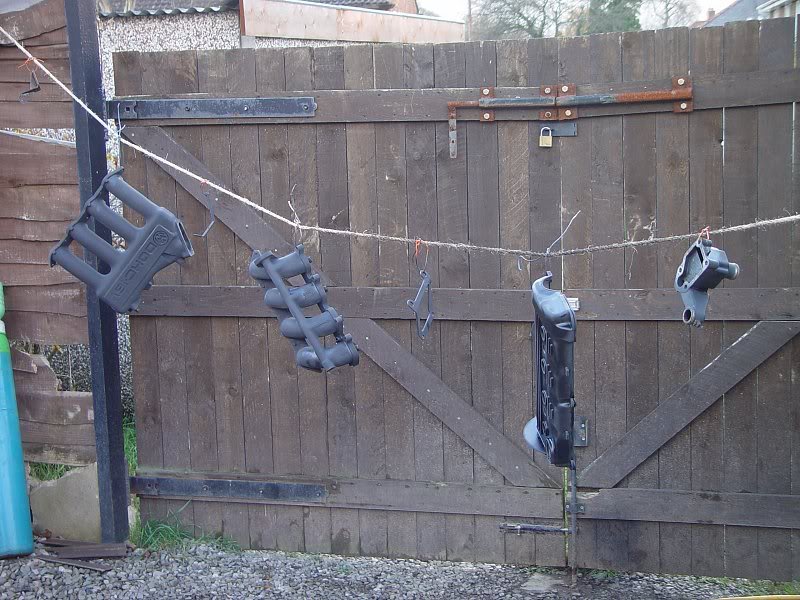 The paint is nothing more complicated than VHT black paint, which gives a nice matt coating. I know the components technically don't need to be in VHT, but I prefer the finish:

Now I need to work out which parts I'll be using off which engine (eg alternator, water pump, oil cooler, etc). I need the car together for a couple more weeks before I can take it off the road and whip the old engine out. Its going to be a number of weeks/months, because I'm going to be painting all the other little bits in the engine bay too, hopefully once finished it will look proper tidy in there!

Now you've got two pairs of exhaust cams you could chop the sprocket end off the spare one and create a slightly hotter inlet cam.

Yeah, I'm keeping the cams on the 'mild' side, I'm not really after top power, just a nice driveable car with a good spread of power all through the rev range.

Anyway, slow but steady progress is being made. I have pretty much stripped the new block, I need to wait to get the car off the road before I can sort out which bits are going where. The block is still a bit dirty and has surface rust, so I need to have a think about what I'm going to do here. I guess duct tape over the holes, would be okay for painting it?

i supose i'll need to tackle my 9a soon
My project

Progress is once again slowing, annoyingly in removing all the bolt-on stuff from the engine I snapped 3 bolts. One holding the water pump, another 2 holding a coolant adapter (circled in red):

So I've been drilling at one of the bolts, pretty much all day, made a little progress but its not yet out. Whatever metal they make bolts from, is tough - seemingly tougher than the average drill bit! I have gone through about 5 sets of cheap drill bits.

The trouble with drilling out bolts is that if the drill doesn't bite and get cutting straight away, it just work hardens the bolt's surface instead, making it even harder to drill it out.

Have you tried a heat gun to warm the bolt and the head at the same time? The different rates of expansion should help get it loose…

Weld a nut onto the snapped off portion of the bolt (fill nut with weld through the hole in the centre). Heat tends to help free things off......

i have tackeled this problem with a genter drill from a lathe to start a center, then with a cobalt bit of 2.5mm with oil cooling. stops the bit from jamming and breaking, then 0.5 mm steps utill the bolt falls apart before the thread gets damaged.

when i stripped my 9a 3 weeks back the same happened with one of the exhaust studs, and this methood done the trick.

Great suggestions guys, I'm going to have another crack at it tomorrow. The plain old drilling a hole wider and wider was getting there……really slowly……..today. I have a small file, which will fit into a 4mm hole, so I can carefully remove the rest of the bolts. I like the nut welding idea too, I've heard about that one before, didn't click that the heat generated in the welding would also free things up anyhow. So I have that option if needs be.

Things have moved on a bit. I've started removing items which will disable the car, so the exhaust system, battery, radiator, oil cooler, etc have all come off and the front of the engine bay is pretty clear. Also made a bunch of disconnections ready to pull the engine, and drained the fluids.

The problems of a lowered car! Spoiler has been removed, it gets right in the way when pulling out the gearbox.

Front of engine bay is pretty clear now (oil cooler has been left there for convenience, for tonight), ready for lifting the engine out.

Finished taking the old engine out of the car today (its for sale if anyone's interested?), all went relatively smoothly, only problem being I had to dodge the rain showers. I finished off in the dark, hence the poor quality pics towards the end. This time round, I've labelled a lot more of the wires which were disconnected, because they'll be going on in different places once the new motor goes in.

The engine and box came out using the now-familiar "over & under" routine - the box comes out underneath, which makes taking the engine out over the front panel, so much easier.

Engine's weight taken on crane and left mount unbolted. Drivetrain lowered to lean at an angle. Right engine mount left in place and gearbox unbolted and slid down a wooden board

Engine brought back to the horizontal, so that it doesn't shift on removing the right engine mount's bolt.

Gradually bringing it up and forwards, the crane misses the bonnet luckily!

Bet you can't wait for some of that power! Should be fairly straight forward to get the new one wired up. Guessing it's pretty similar to the 1.8 KR (if not the same) which I managed to do many moons ago. So if I can…
Megasquirted 1981 Silver 1600 GTI Daily Driver


I've been there so many times, the worst thing is, my parents have a perfectly good garage, they just won't let me use it  :evil:
93' Mini Cooper 1.3i

Dreaming of a mk1 GTi.

Which way are putting the 16v engine in mate?  I dropped mine in through the top, never again!!! :evil:
If I was doing it again I would lift the front of the car over the engine.  You can do it from the top but it's much more difficult

Which way are putting the 16v engine in mate?  I dropped mine in through the top, never again!!! :evil:
If I was doing it again I would lift the front of the car over the engine.  You can do it from the top but it's much more difficult

Why not over the top? Is the 16V inlet manifold so much deeper that it causes real issues somewhere? I didn't have any problems with it this way (last time I put an 8V in), its pretty easy once the gearbox is out the way - the engine would go in before the box, and the box goes in from underneath.

I nearly took it out all underneath the car, just for the experience, the only problem is once you've lifted the front of the car, eg with the engine crane, its legs would be in the way of the engine.
0 guests and 0 members have just viewed this: None.