Ok peeps, last bit of the kit  came off today, few spots on the rear arch but nothing serious which was lucky! Didn't realise until now that the bodykit has had some custom smoothing work done to it! Couldn't understand why, when pulling it from the car, it was cracking in the middle of the skirt, wasn't until I really yanked it that this happened! As with everything so far, looks like originally it wasn't a bad job, just wish the front wings had been better protected. 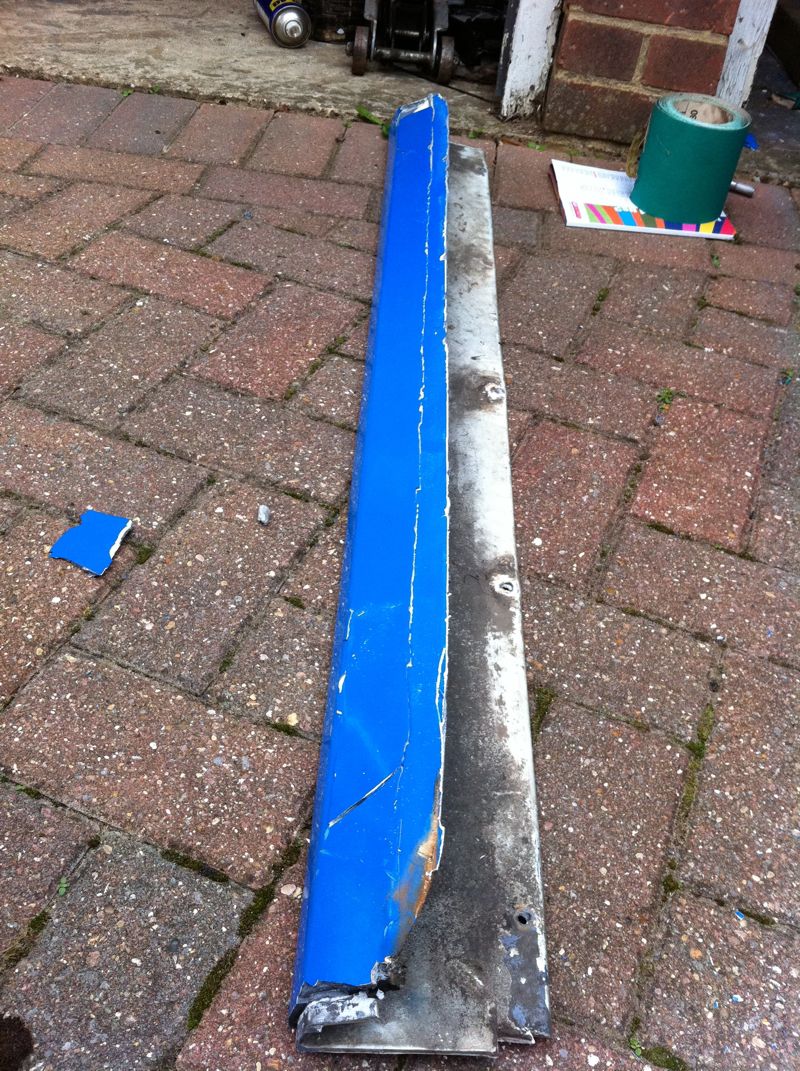 Front wing is a "little" rusty but not as bad as the other side, which is odd, as this was the one that looked worse pre removal. rear arch and sill covered in gunk! This stuff is tough as hell! About an hour later, using a hot air gun, a scraper and some 80 grit sand paper, I managed to get the rear arch and sill cleaned up a bit. Less the bodyshop has to do the better. Rest of the sill looks nice and clean Small bit of welding required here but nothing major, could be a lot worse! The final result, nearly ready to hit the bodyshop! so glad you decided to take the kit off! they look way better without em. i do love how bright the colour is too!

so glad you decided to take the kit off! they look way better without em. i do love how bright the colour is too!


Hahaha don't be so sure

Had to come off to get to the rust underneath, will be getting the car sprayed as is, lowering it a bit more and adding some nice rims, but if I still don't like it after after driving it i'll put the kit back on next year!

If I decide to change the colour though i'll definitely keep the kit off, I just think in this colour the kit really compliments the colour. i ust dont like the kits :/ personal preference thats all. hah

im sure theres gunna many things going on with mine that people dont like ha.

i ust dont like the kits :/ personal preference thats all. hah

im sure theres gunna many things going on with mine that people dont like ha.


Loving the look of yours!

As i've said all along though, as soon as I get some 14" dished rims and a few more notches on the coilovers, like yours for example, i'm sure i'll love it. The current wheels feel like they would go well with some huge subs, neon lights and a sunstrip

thats probs only coz the pic aint clear

get up close theres waves than in the pacific on my mk1 haha,

Where did you get the new switches from? do they do a pair of them together say for a drivers arm rest to control both?

I've sent you a PM about your MFA thread too

Got the switches from ebay

Probably the best buy of the entire build to be honest, stupidly cheap yet surprisingly good robust build quality,

The are standard 6 pin configuration and light up red in the middle too when you turn on the dash lights. Will need to get a pics as they look spot on!

As far as I can tell they are the same or similar wiring config as a set of polo ones too.

Mine are in the center console so I only needed two but for a passenger and drivers double in the drivers arm rest (or better still in the top of the speaker pod in door card pocket) would be a simple case of branching off  and running the a second set of passenger window wires to the drivers side and hooking them up to a 3rd switch.

I recognise the bonnett!!

Glad she is living on such a lush car!!

Looking good. Its a really nice colour too!!

I recognise the bonnett!!

Glad she is living on such a lush car!!

Looking good. Its a really nice colour too!!

Thanks for the kind words, bonnet was a nice fit too!


Well since pulling the kit off the car progress has stopped on the golf completely! I had made an appointment to go see Steve Denton from StyleHaus to get a quote for the paint work, was looking forward to getting a date to finally have the ork done.  However a few days before I was due to take it to Northampton my flat sold, not all bad news as I should be moving into my new place soon. Unfortunately this means that I won't be doing much to the golf any time soon!

Because I'm still in project mode but can't really do much I decided to have a little play around in photoshop to keep me happy, ended up working on this for a few hours: Pinned up on the wall at work to remind me that the extra hours i'm working will be worth it.. Eventually!

I love the interior! I agree the kit looks awesome on this colour, not normally a fan! Good luck with the move and the car!

Did you sell that spare drivers seat you mentioned earlier on, interested if its nice.

Unfortunately I sold the whole lot (3 front seats and rear bench) only last week, If you PM me you email address I can see if the new owners are willing to sell the spare one and pass on your details.

what kinda boddy kit is on her??

It's a BBs kit, it's for sale if your interested

actualy what condition is it in?? picts please

Almost forgot about this totally, car hasn't moved an inch! Flat sale fell through last year but managed to get it sold again last month and have finally moved into my new house! Hopefully with that out the way and a new job in May I might be able to kick start the project again.

I do indeed have 2 BBS kits for sale. The blue one is as per the thread but does need a bit of a rub down.

Will try and get some photos up soon!

Few jobs that need doing to start with: