Thought I'd share my project with you, it's been a long time in the making!
The car in question is an '83 GTi which I have owned since about 1992. I ran it for a few years until bits went wrong and I decided to take it off the road, and not put it back on again until it was all sorted.

That was about 17 years ago.

I did absolutely nothing on it for about 6 years, then had flurry of activity and stripped it down and replaced some suspension bit's and pieces. Then put it back on axle stands and covered it up again.
A couple of years ago I had to move it from my folks garage, and it ended up, via a friends garage, in my very tiny garage. That's when I started on the body work. My intention was to do as much as I could (which was mainly filling in dents as it was in very good nick) and then just give it to someone to paint - money is always an issue!
After two years of very slow progress I figured I'd done as much as I could and set about finding someone that would paint it for me. In the end it was done through a friend of a friend for a sensible sum of money. He re-did most of my work as it wasn't up to his standard. I think his quote was "I don't know what you do for a living, but your probably very good at it. I'm very good at what I do." A very subtle dig if ever I heard one"

I now have the car back - and it looks lovely - really really happy with it. I can't recommend Darren enough, so if you are based around Leeds/Bradford he's worth taking to - http://www.kapsuzuki4x4.co.uk/

So after 17 years I'm starting to put it back together - due to restricted garage space my first priority is to get the watertight so I can move it outside so I have space for engine building and all the other little jobs!
I've resprayed the window guides, cleaned all the rubbers up and got the glass in both sides. I've got the tailgate sticker to go on, then I can get rear and front screen in.

My plan is to have it finished before April next year - gotta be realistic! 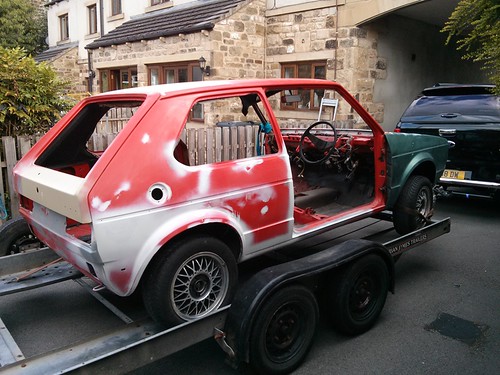 After (my Daughter approves!) 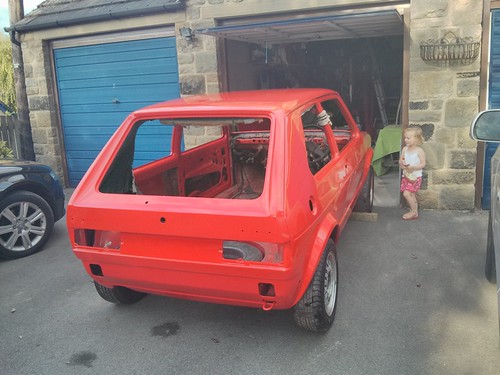 Cheers!
My rebuild thread I will try and keep up to date: here

Looking good buddy. Good luck with the project. Hope all goes to plan for you mate

It's been a long time since I started this thread, with not a lot of updates, and I definitely didn't make April 2014!! That said, things have been moving on.
Car got painted, glass refitted, rear hatch decal fitted - then we moved house so it was all stop for a while.

Last year my time was mainly spent going from this:

This year I've managed to get my Mk3 servo fitted, along with a T5 master cylinder, run the front brake lines and part of the rear, fitted the Audi carriers and calipers, 16v discs, eventually getting the right pads!
Engine had some machining done last year (it's not the original, that ate itself and couldn't be salvaged), it's got oversize pistons (std. oversize) and been fully balanced.
Painted up with new core plugs:


managed to get the crank in last night.

Pistons next when my ring pliers and ring compressor arrive (lost the last ones).

I'll try and keep this thread up to date (when progress is being made!). I should add that I'm not going to the level of detail that some of the other excellent builds are going to, as I'd never get it finished. I also think if I made it too perfect, I'd never want to drive it!

Relatively productive weekend! In between family life managed to swap the pistons to the reground con-rods, get the rings on them, and get them in the block.
Before:


Next thing I need to do is get the block back off the stand so I can fit the clutch-end crank seal, so I can get the sump fitted, then it's on to getting the head on.

J
My rebuild thread I will try and keep up to date: here

Bit more progress this week - managed to get the block off the stand and fit the clutch-end seal on (bloody heavy with the crank and pistons in).
New water-pump fitted, intermediate shaft in, crank sprocket on, and last night, got the head back on! Starting to look like an engine now.
Need to get the engine mount bush pressed in and then I can get the timing belt stuff sorted out.

Slow progress recently - seem to spend ages on little bits that are only incremental additions to the whole!
Sorry about some of the pics being dark - it's because I only have time to work on it at night!

Inlet manifold cleaned up, all new hose clips, fitted.
Before:


Also cleaned up the exhaust manifold (citric acid is wonderful stuff). Had to replace a snapped stud in the manifold, that was a PITA, just glad I have a pillar drill. I only painted it because I didn't want it going all rusty again too quickly.
Cleaned up the dizzy, got that on - I'm still trying to source some new spring clips as the current ones are a bit worse for wear. New water pump as well.


Got my brake lines plumbed in to the MC, including the new colour coded residual pressure valves.

Cleaned up the timing belt cover, couldn't find the one that was on my engine (which wasn't in bad nick) so had to use the one that was on my donor engine. It had been brush painted - thickly - so that took some doing. Just need to spray it up and then fit it. At which point I think I'll get the engine in the car (with a support beam) and turn my attention to gearbox and driveshafts.
Slow and steady!

could have spent a bit more time
on the inlet manifold

could have spent a bit more time
on the inlet manifold


The problem is - I wouldn't know where to stop, make one thing really nice, and then something else doesn't look as good, and before you know I'm in to the same territory as some of the other chaps on here with their super clean and tidy builds! Don;t get me wrong, they look excellent, but I have neither the time, patience, or money. I kind of like the idea of it looking used but clean if you know what I mean! I looked at getting it soda blasted but that would be £40 that I can spend on parts, plus I'm trying to as much as I can myself.
My rebuild thread I will try and keep up to date: here

Can't beleive it's over 6 months since I updated this. I'm starting to accept that I only have time to work on the car in winter. Seems mygood lady has other jobs for me in summer!
Anyway…
Tidied up some broken wiring in the engine bay, fitted the correct plug for my m/c reservoir fluid level sender and put a connector in so that the standard plug can be reverted if it ever needs to go back to stock.
fitted all the vac and some of the coolant hoses to the block, all nice stainless jubilee clips.
Discovered on torqueing up the coolant flange on the side of the head that the threads had been stripped. Further investigation revealed that the studs had been effectively glued in. On removal I had a hole like this.

Borrowed a helicoil kit and did both holes, quite happy with how that turned out.

Flange refitted and all good.

Then got round to taking the engine off the stand so I could fit the clutch and flywheel.Centred by eye, and when measured was spot on. In may haste I did get halfway through fitting the clutch before I realised I'd forgotten to put the gearbox backing plate on. Doh! Still, it could have been worse.

Got the engine (without gearbox) in the car. Milestone event - there hasn't been an engine in here for 20 years!! Had a few beers to celebrate and admire my handiwork.

Turned my attention to the gearbox. The one I'm using was aquired as a spare many many years ago as I want to do a full refurb on the original one in the future. It was pretty filthy - this is after a first pass with degreaser.

I wasn't trying to get it spotless, just get the muck off.
Replaced the drive flange seals with my nifty homemade removal tool.

Then attacked the output shaft seal, again, top tip from BrokeVW, although I had to lever hard against my removal tool to get that seal out. No way that would have pulled out.

New one went in a treat.

I just need to replace the clutch release arm seal, and then I can get the release bearing back in, and fit a new endcap and it will be ready to go in.

Seems to be progressing now - at least it looks that way when I'm actually putting stuff back into the car instead of just cleaning/fixing bits off the car!
My rebuild thread I will try and keep up to date: here

Good work on the gearbox, your home made flange removal tool looks as crude as mine but it works so all good.

Some fresh fully synthetic gearbox oil and it will be like new.

Mark - any recommendation on gearbox oil?
My rebuild thread I will try and keep up to date: here

Mark - any recommendation on gearbox oil?


I've been using this stuff in both my cars for approximately 6 years (recently had a gearbox oil change as I do every 5 years/50,000 miles)

2 bottles is plenty as I find my gearboxes take about 1 and 1/2 L before it pours out the filler hole, then I jack up the passenger side a little to add in a little more.

Mark - any recommendation on gearbox oil?


I read a lot of good reviews about Redline MTL so have put that in mine. I'm sure any decent gear oil as Mark says would be fine.
Nut & Bolt Resto in Progress:  https://vwgolfmk1.org.uk/forum/index.php?page=topicview&type=misc&id=projects%2Fyour-mk1-golfs_2%2Fpistolpete-s-mars-red&start__keyed=
0 guests and 0 members have just viewed this: None.