First off you need some parts 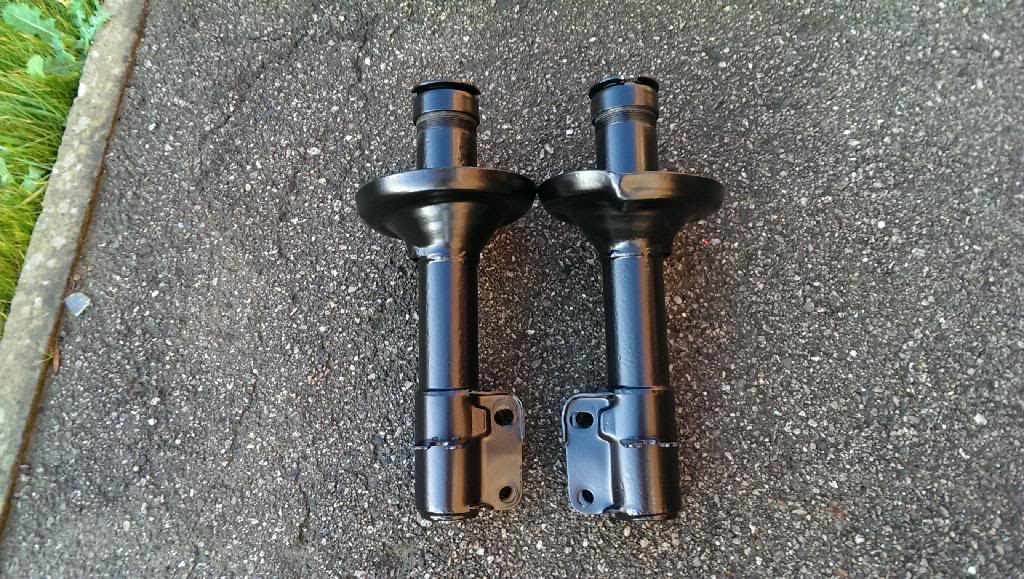 2 strut housing's from here http://www.classic-vw.co.uk/mk1-golf-powder-coated-front-strut-housing-1046-p.asp these are great value for money 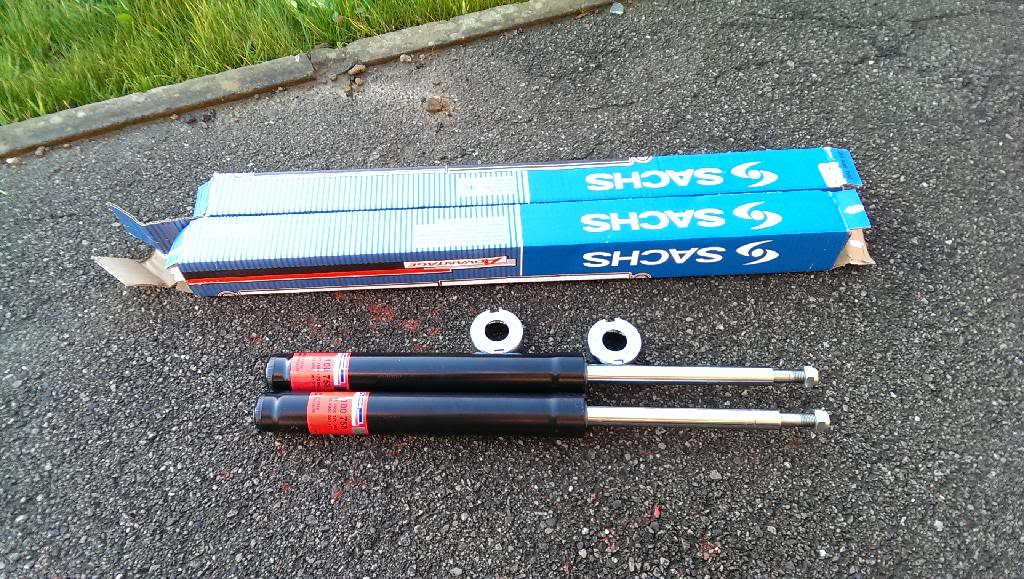 When you take your car apart and get to your shock inserts. Some models usually older ones have serviceable front shocks and all that's needed is fresh oil. I used the same stuff that's recommended for topping up the hydraulic hood pump. 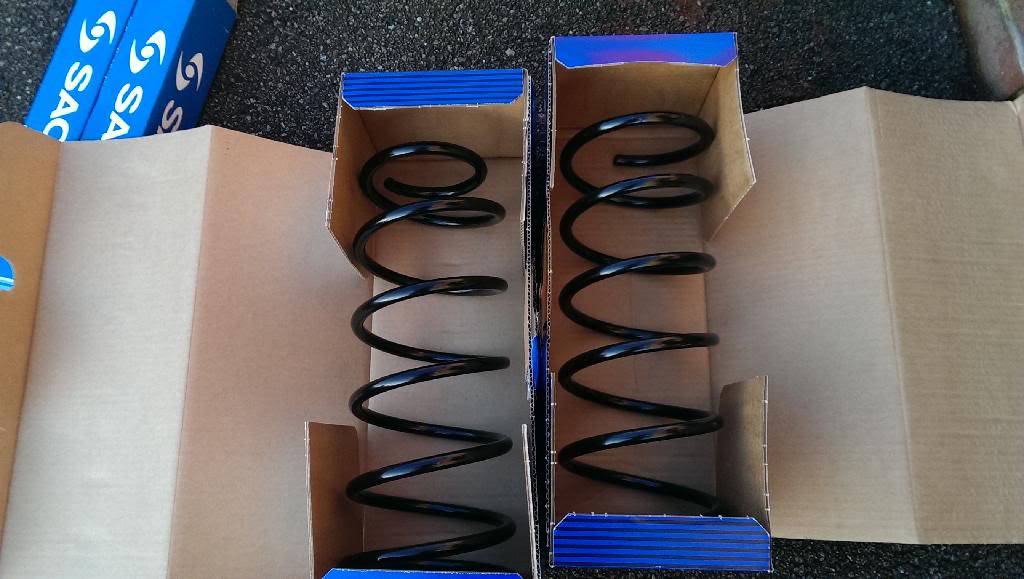 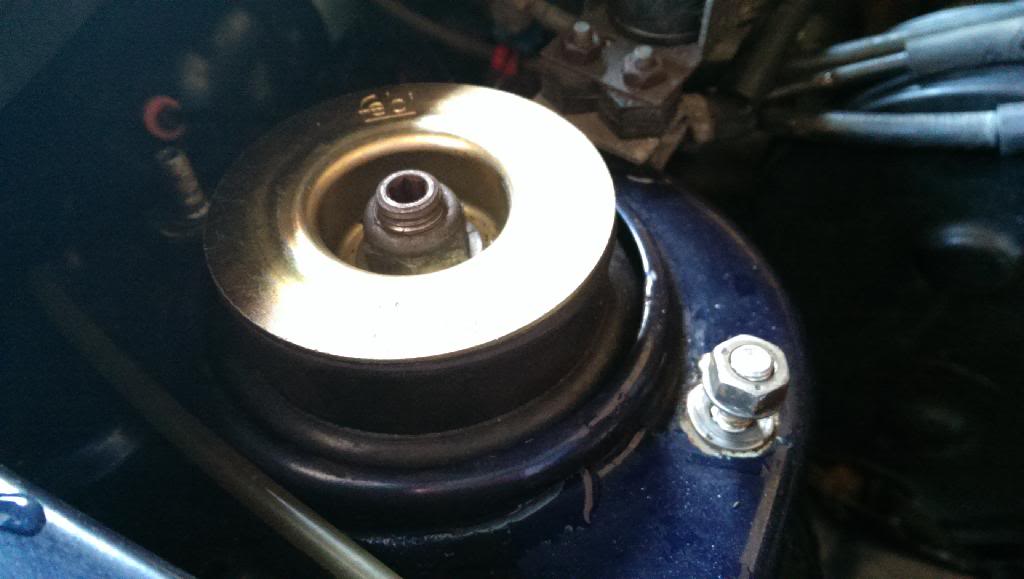 Take the front wheel off on whichever side your starting on and support with an axle stand.

Before taking the 2 bolts out of the bottom of the strut clean with a wire brush and mark with a paint pen the position of the strut so you dont mess the tracking up. Then remove the two bolts. 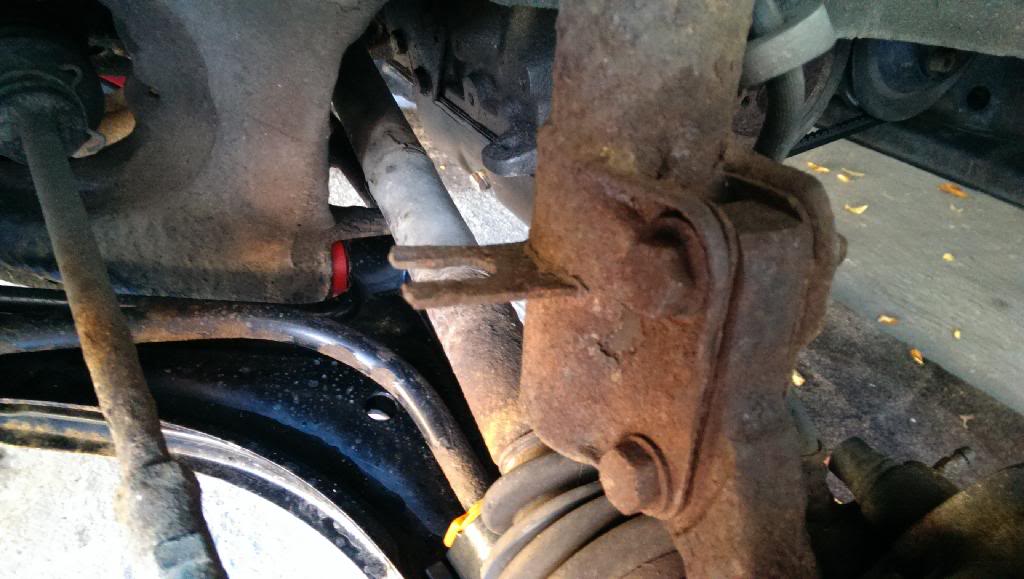 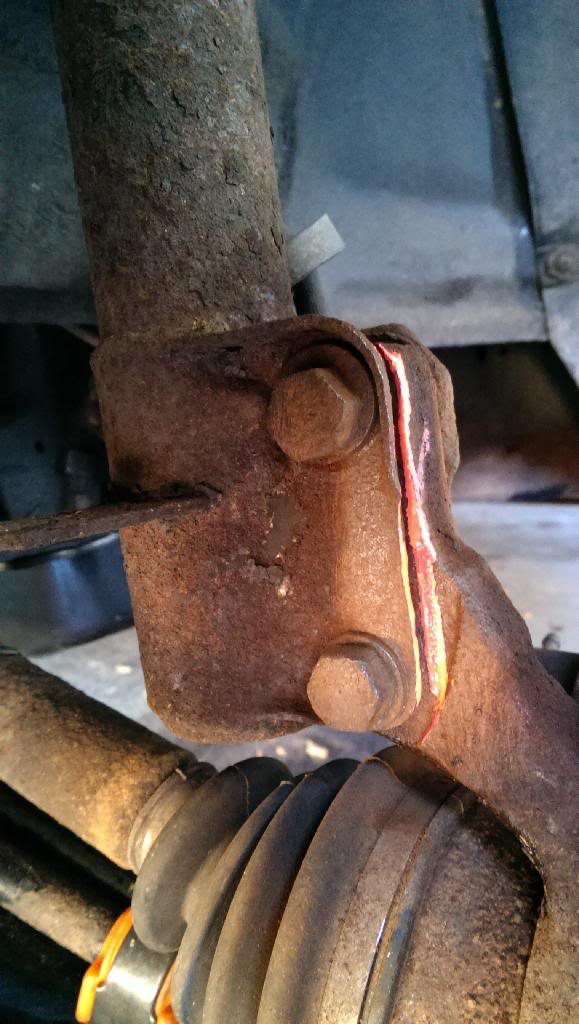 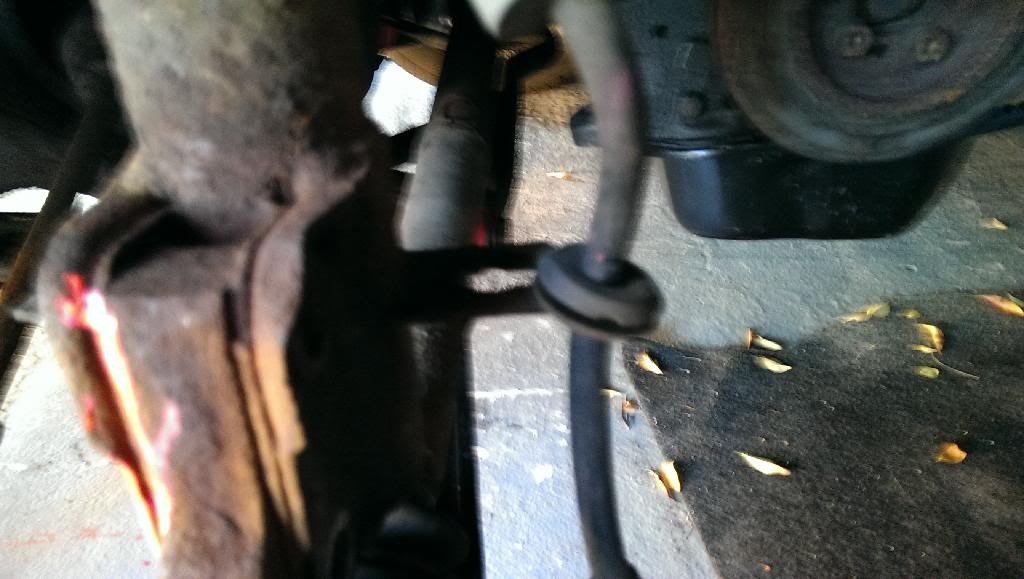 The strut should now be free, use spring compressors to avoid a broken nose, making sure you have compressed the springs tension. Use an allen key and spanner to release the top mount 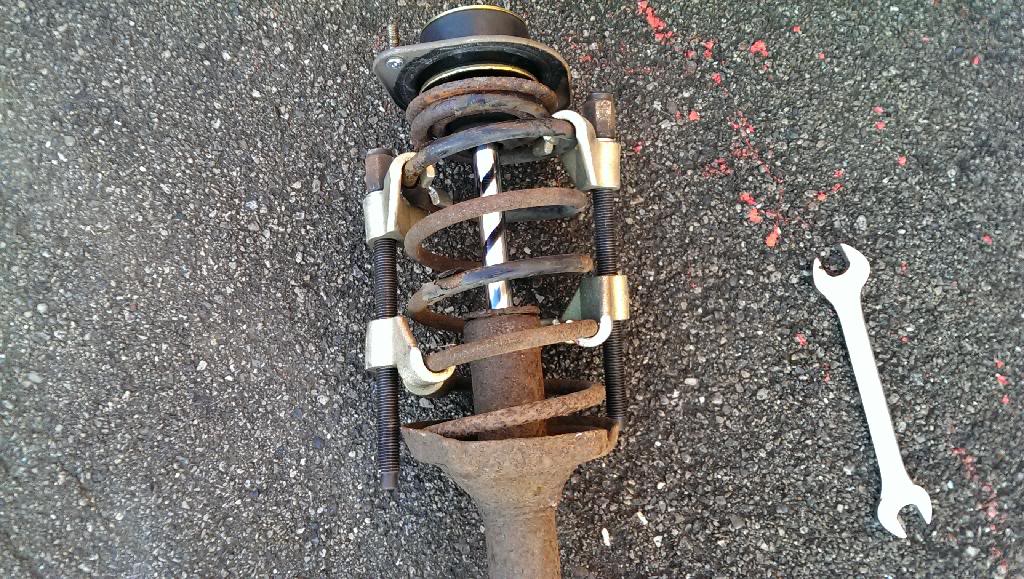 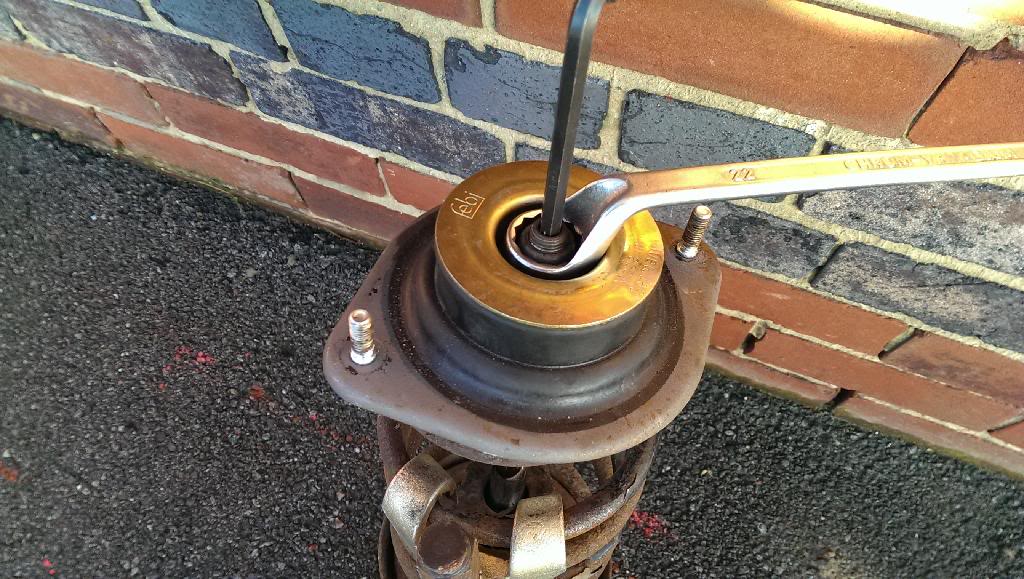 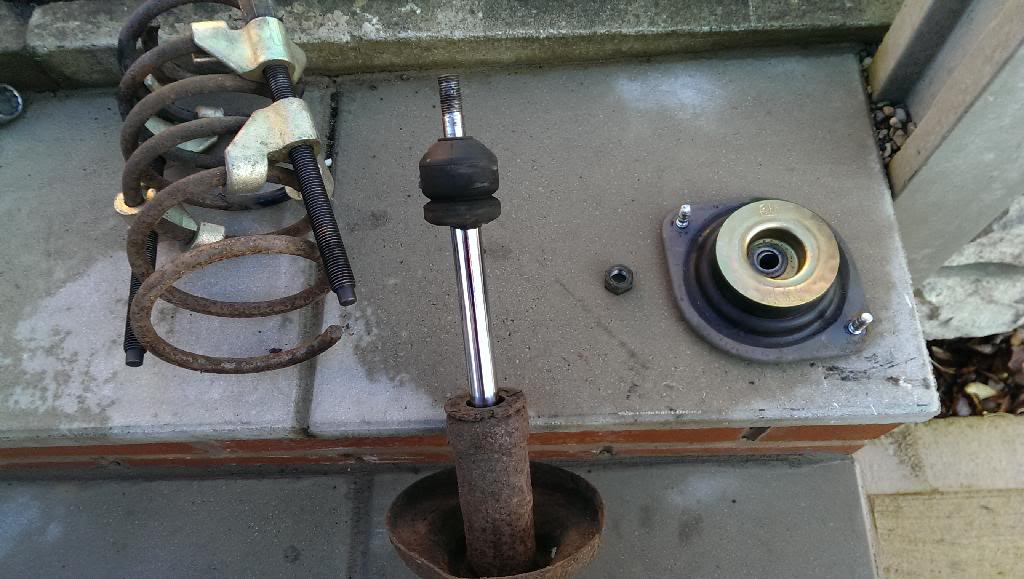 You should now compress your new spring and do the reversal of what you just did. If your reusing your old strut housing you will need to remove the shock absorber cap. 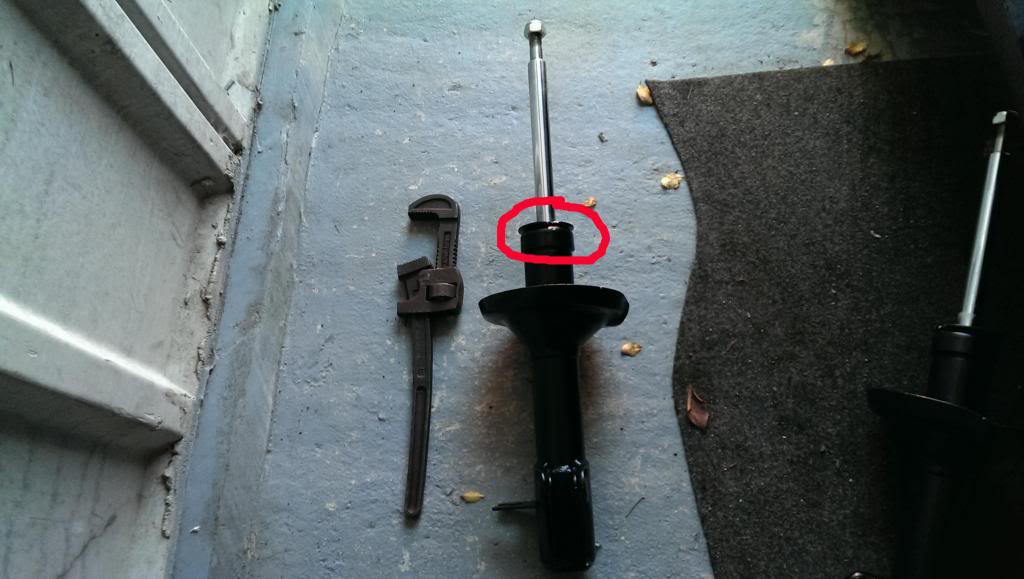 If you are reusing the strut housing you need to take the top cap off above. I didn't even bother trying as my old ones had holes in the bottom support for the spring.

You have to put it in a vice, use penetrating fluid and a lot of brute force, sometimes this is not enough and some heat is required….

Compress the new spring refit the top mount, not forgetting the bump stop and cap. 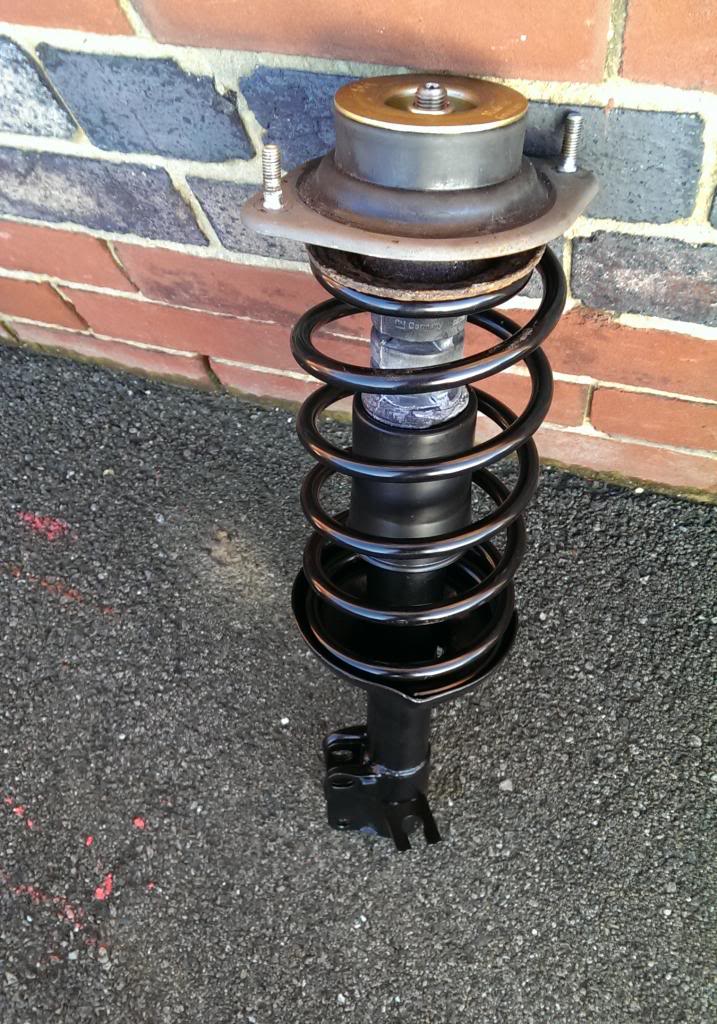 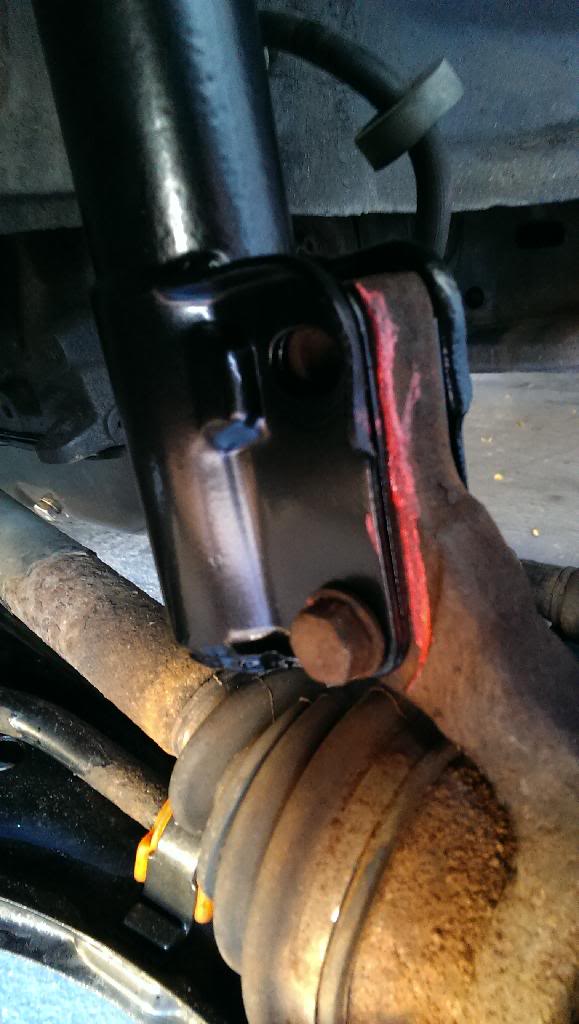 Now go for a drink chill out, jobs a good un.

I know the parts are from different places because that's where I found them the cheapest. No one place sells all the parts and if they did they seem to be over pricing one or two items.

Thanks for posting this, very useful for me as I plan to fit lowered springs and shocks to replace my budget coilovers soon. Just need to know what to get for the rears now

For the rears from memory you need:

Shocks (mine came with lower platforms)

There is a nice diagram on the vwheritage site.

i have a set of coilovers in garage but i think i'll just fit lowered eibach spings and the insterts instead.

thanks for the write up.

i pressed the little red button

Just in the middle of doing this myself. I have gone with Eibach pro kit lowering springs and have ordered Bilstein inserts. Sending the strut housings to be powder coated along with the spring seats. New Bilstein top mounts too.
Sticker Pig

The ride on a car is very important especially when its a daily runner.

Awesome thread. Thank you.
I just chop the chips🍳🍳🍳

Do you need to fill the housings with oil when you put new gas inserts in? I've just done mine but the shocks seem a bit loose in the housings. Great guide thanks

I pour some waxoyl in the empty housing, making sure its enough to be expelled when the insert goes in. I use this because it stops being runny after a while (unlike oil) and hope fully seals it up as I have found in the past water (rain) gets in and makes a rusty mess.

Hello Gentlemen, just doing my front struts now. All apart ect ready for reassemble. Got new bilstein dampers but when i have them back in housings and wind down new nut to secure it in the housing, there is up and down movement in the damper. Is there such a thing a small spacer at bottom of housing? Or even washer to fit at top under the tightening nut? Obviously need to stop this movement.
Is there a knack to fit bump stop and dust cover together as well. All new but didn't want to force them and ruin

First make sure the threads are clean and the nut screws all the way down,  if not a washer as you suggest in the bottom of the strut housing may help. lubricant may help with the bumpstop dust cover connection.

Pour a couple of cap full of neat antifreeze into the strut before fitting the shock, it will help with heat transfer and stop the shock rusting into the strut housing.
Just don't lye the strut down or turn it upside down once you have done this or the antifreeze will dribble out.

Pour a couple of cap full of neat antifreeze into the strut before fitting the shock, it will help with heat transfer and stop the shock rusting into the strut housing.
Just don't lye the strut down or turn it upside down once you have done this or the antifreeze will dribble out.

And most importantly do not forget to prime the shockers

Sent from my SM-G955F using Tapatalk

Do not know a lot but willing to help if possible

Thanks for the reply. Will do some more this weekend and hopefully rebuild struts

I use a cap full of ATF, Oils is better.
I also have learned over the years that if you take off the whole strut assembly, that is by removing the Pinch bolt on the lower ball joint and separating it from the control arm, (yes you have to undo the outer tracking rod and remove it from the Spindle).  The whole shooting match comes out, and you can effect replacement or repair of it without throwing your alignment out.

Also I used to use 3m Window weld on the lower side of the mount about a week before the jog to extend the life of the mounts, I also tack welded the studs to the bottom of the mount, I had 2 new mounts spin one of those as I was tightening it and I was left with the issue of not being able to get it off, or tighter.  I ended up worming my arm up the strut tower, and getting my wire welder up through there to hit the heads of the studs, I had used a pair of Vice-Grip pliers on the studs nut to keep it firmly up as I welded it.  So now I advocate doing it prior to installing any new mount.

But since then I have another easier trick to fill the gap.
Some guys simply buy these exhaust rubber straps:

Then insert them between the bottom of the mount and the metal to fill the gap, doesn't need a week to two weeks to fully cure as the urethane 3m window weld does and does the same thing by limiting travel of the front mounts


Yes you have to remove the brake caliper and suspend it from the thing using a metal wire, but saves you the step of the alignment or tracking as y'all call it.

One last trick… is make sure on your oem struts that you clean out the weep holes on the mount as that allows water not to pool in the lower mount and rot it away.

What do Divorces, Great Coffee, and Car Electrics all have in common?

Lastly if you take off the strut mount from the spindle go get you one of these guy's.  and take the measurement for the camber on the caliper and write it down, I use a sharpie marker on the rotor.  Going back relocate to your marks on the strut to spindle, then using the camber adjust your setting to the same as you removed it.

Since my eyes got older I went for a bigger version.

What do Divorces, Great Coffee, and Car Electrics all have in common?

Where are my DIY Links?
0 guests and 0 members have just viewed this: None.