I am looking for thoughts on the brake line positioning
Thanks am using the flexi hose holders from the mk2 + mk4 callipers. The hoses I purchased ideally would have been a little shorter however I am where I am on that.

Have mounted the wheel on the axle to check clearances and it's ok but a little tight for the solid line.
This is where I need your input/experience  - does it look alright to you guys or is it a bit sketchy by the wheel edge?

Just seeing if I am being too maverick or cautious here.

If anyone has a similar set up photos would be helpful.

While copper is easy to bend, I think that I would of gone steel, as that takes road rash a tad better, and I would suggest copper grease on all fittings, and or teflon tape, even on the bleeder ports then hole the tape at the hole on the bleeder.  Makes them easier to remove later.

I would also isolate the copper pipe from the axle by using rubber grommets split and slipped over the lines, or rubber strips and tie-wrap it to the axle with stainless steel wire-ties, as I know this is mocking up, but consideration of anti-rubbing and chattering should be considered to prevent the lines from repositioning themselves and or chaffing and eventually holeing themselves or work maring your pretty looking axle.
What do Divorces, Great Coffee, and Car Electrics all have in common?

Thanks Brian.
Lines are copper plated steel so I should be ok on that one - more luck than judgement though.

Thanks need copper slip is at the ready for when I do the tightening up.

Insulated to bracket with some fuel hose slipped over the line before making off the ends so nicely secured and my rear axle is electro powered coated so pretty well insulated for galvanic corrosion.

Stainless ties is a great shout and I shall invest in them.

Any thoughts on the route near the wheel?  I think with the ties you suggest I will be happier with it as it will be more stable and not possibly move into an area where it can rub.

As you can see the gap is a finger size so ok but not exactly spacious.

I'd say the gap is fine - if the wheel moves that far to hit the line, I think you'll have bigger things to worry about that the brake line. Are you going to shorten the hard line to take out that loop? It just seems a little unneccessary to me…
My rebuild thread I will try and keep up to date: here

Need to take it inboard from the wheel and down to the beam to be secured. Can't go straight down because that's where the ARB clamp will position when I fit it.

Just looked at the wheel arch and may need to do it a little more direct. Also need to consider not stressing the union so the bends help with that.

Is the bracket that is folding the hard to flexi union modifiable at all? Could it be an option to bend towards the axle it so that the hard line enters at an angle? Or maybe even straighten it out so that the joint is nearer the centre line of the wheel. Looking at the pics, I'm even wondering if you could rotate it on the bolt that is fixing it to the axle? This would have the effect of bringing it further inboard, and nearer the wheel centre line.
Does any of that make sense?
J
My rebuild thread I will try and keep up to date: here

It's a bit of cutting/drilling, but could you mod the bracket to allow the pipes to run like this:
My rebuild thread I will try and keep up to date: here

Yep. Like that may just heat the bracket and bend it down and that would do the job.

It's spring steel so rock hard but should bend with a little heat.

Cheers for the input on it always the vision I needed. Will post once done. 👍

Just a little more bending of the flexi hose support and rough rework of the ridged line and it’s looking better. 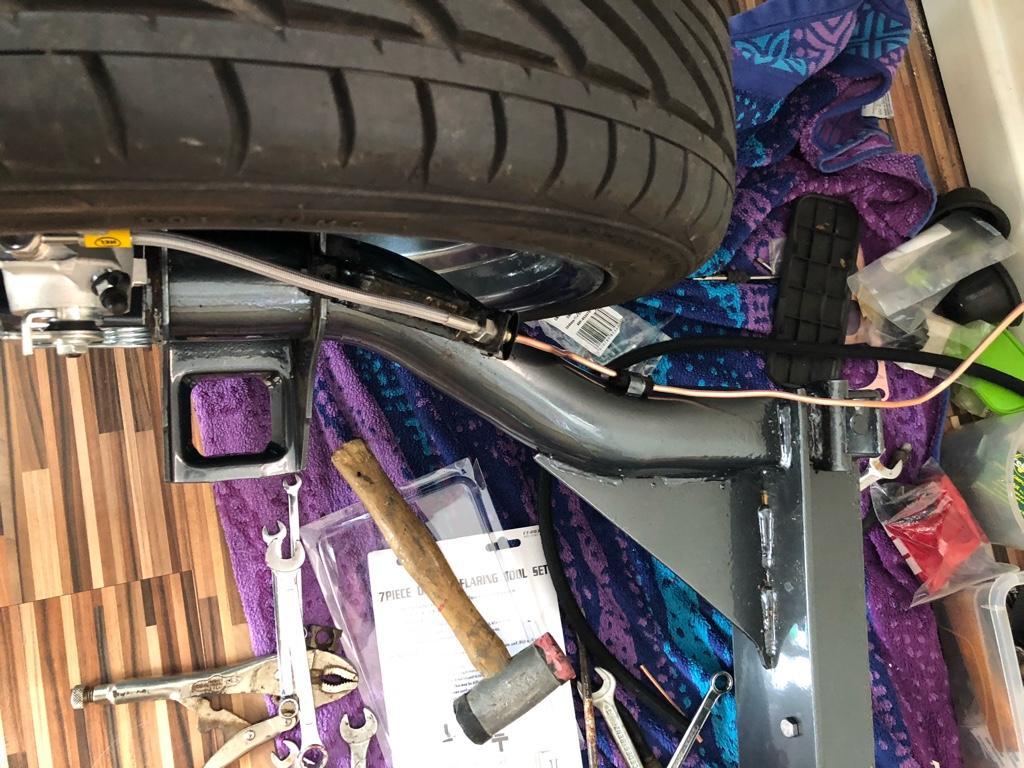 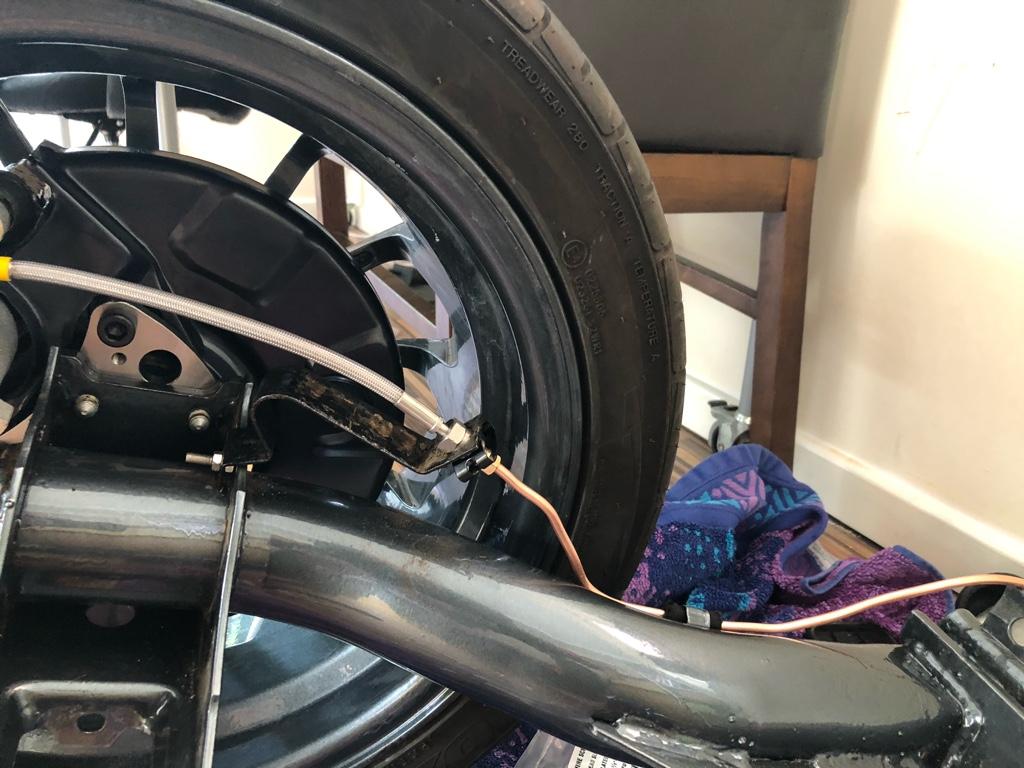 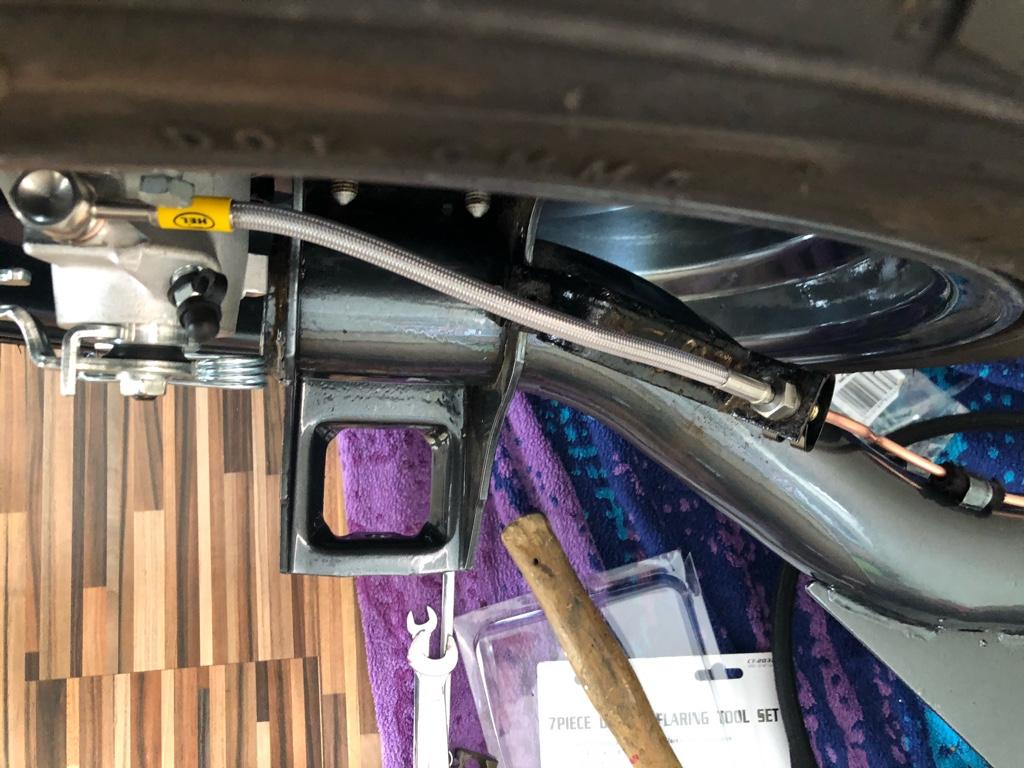 Sent from my iPhone using Tapatalk

Closing this out for anyone that needs to do this mod.

Firstly it’s not cheap. Allow about 750 to 1000 to get it done to the standard I have, which I consider good for a novice and built to last. If you don’t refurbish the rear axle then maybe you could do it for 500.

Anyhow. I am now happy with the line location just need to do the other side but Harlequins are playing Sale tonight so it’s a tomorrow job.

Some photos of the pipe run with both ends made off.

If you want to see me wrestle this and the new fuel tank in then pop over to the other thread.

Thanks to those that helped me out and get my peanut brain around this one. 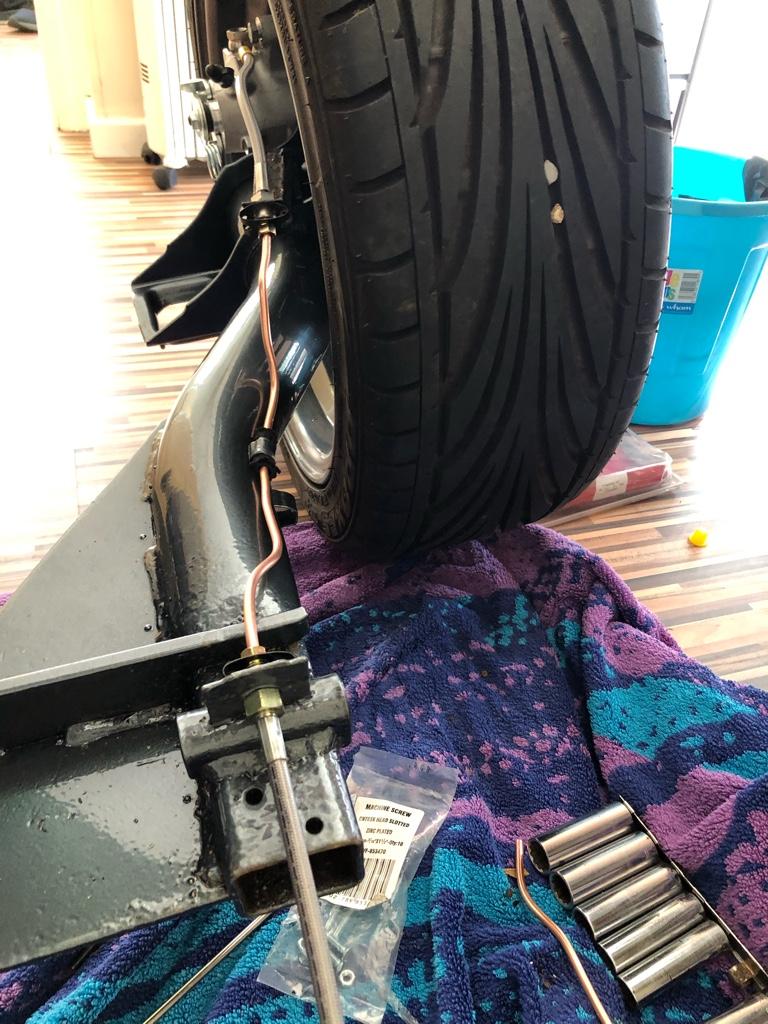 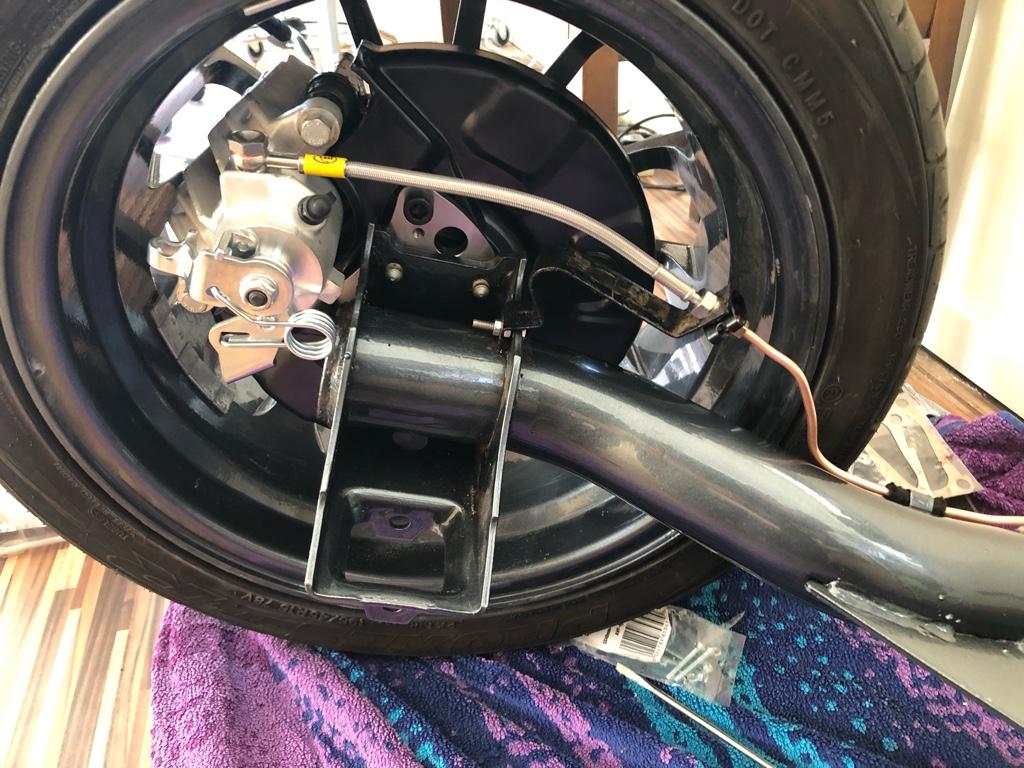 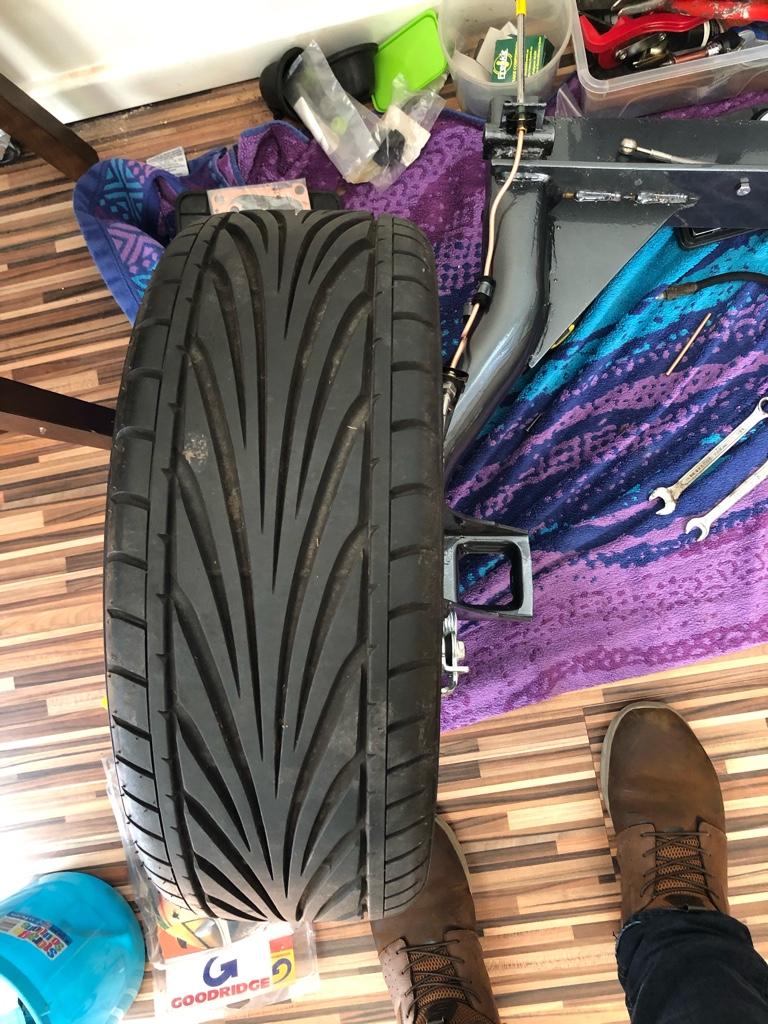 Sent from my iPhone using Tapatalk

should have flex hose at attachment of axle.
What do Divorces, Great Coffee, and Car Electrics all have in common?

It's up to you, it's your car, it will work and seems neat enough.

Personally, if I bought your car, one of the first things I would do is change out that flexi for a hard line.

Flexi's are necessary where there is axle movement for obvious reasons, but they are the weakest link, especially the braided ones, because you are unable to see any signs of perishing or cracking on those.

Flexi is needed to allow the calliper to be moved when changing the brake pads.

In that case, they’re a bit long, but good job!

So how have you uprated the front brakes so that you still get a 60/40 front bias, and load proportioning?

After asking lots of questions on here and doing lots of research the simple answer is I’m not 100% sure.

However as mine is no longer lowered and I  leaving standard brakes on the front (for now) as it’s more for modernising and general improvement as my power is a pretty standard 1.6 then I should be ok is the general feedback

I have g60 servo and m/s to fit and in the engine bay are some in line valves on what I think is the rear brake lines. I will also re-connect the loading bias valve on the rear beam.

Once done I will need to do some hard stops and make sure I don’t lose the back end - if I do then it will be adding some in line reducing valves on each side to reduce the pressure.  Apparently it only impacts the emergency stop style braking or hard driving etc. So for testing it should be fine I won’t suddenly find myself facing the wrong way (hopefully).

Agree the hoses are a little long but I ordered them as MK4 to MK1 conversion hoses and they can like that. At almost £50 I am working with what I have [emoji12]

Next mission is the servo. Had a quick look yesterday and could be interesting getting that thing out. Just ordered the correct spanner’s as fittings all very tight and once the lines are disconnected then I may see a little more what I am dealing with. I sense a new thread coming on asking for lots of help and advice again. There are two switches on the current m/S which I do not know what they do plus a little aluminium block which splits some flow.  Once again need to work out where why and whether still needed.

Simple job apparently but there are some bits still that make my brain ache.

Yea they are too long.

It would be good to find the definitive brake upgrade though wouldn't it?

And the other consideration is insurance cover - "I've modified the brakes" is not what the insurance companies like to hear !!! Might be wise to get an engineers report once it's done.

Good luck with it tho' 👍🏽
0 guests and 0 members have just viewed this: None.